The John Hope Franklin Research Center for African and African American History and Culture at the Special Collections Library recently acquired the papers of John Wesley Blassingame, a nationally renowned scholar of American history and the author of such influential works as The Slave Community: Plantation Life in the Antebellum South, Black New Orleans: 1860-1880, and Frederick Douglass: The Clarion Voice. Blassingame’s groundbreaking scholarship has had a profound impact on the understanding both of slavery in the United States and the African American experience. The Duke collection includes correspondence, personal manuscripts, and research files from Blassingame’s long academic career. It is particularly rich in materials drawn from his work on the Frederick Douglass Papers.

When Blassingame died in 2000, he was professor of history, African American studies, and American studies at Yale University, where he had been a member of the faculty for twenty-nine years; he chaired the African American Studies Program from 1981 to 1989. Before receiving his appointment at Yale, he had been a lecturer, educator, and historian at Howard University, Carnegie Mellon University, and the University of Maryland. Professor Blassingame’s widow chose Duke’s Franklin Research Center as the repository for his papers after conferring with John Hope Franklin and meeting several times with Franklin Research Center Director Karen Jean Hunt.

Blassingame was a prolific scholar who also served as a contributing editor to the journal Black Scholar and as a member of the editorial boards of the Journal of Negro History, the American Historical Review, and Southern Studies. In addition, he mentored a generation of African American scholars at Yale and elsewhere. Nearly three decades of correspondence with fellow scholars and collaborators, included in his papers, provides insight into Blassingame’s attitudes towards academic life and the study of African American history.

Blassingame’s 1972 book, The Slave Community: Plantation Life in the Antebellum South, may be his most famous work. It was one of the first historical studies to describe slavery from the perspective of the enslaved. At the time of The Slave Community’s publication, most of the historiography of the slavery period derived from the records and accounts of slave owners. 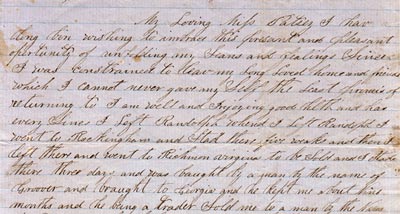 A letter written by Vilet Lester, a slave, is one of fewer than a dozen such letters that have been identified among the vast holdings of plantation records at Duke’s Special Collections Library.

By concentrating on the experience of slave owners, historians had presented a distorted view of plantation life that, in Blassingame’s words, “stripped the slave of any meaningful and distinctive culture, family life, religion, or manhood.” Blassingame addressed this distortion by analyzing, among other sources, fugitive slave narratives published during the nineteenth century. In so doing he overturned prevailing stereotypes about slave character and behavior and provided insight into the complexity of the cultural and social lives of African American slaves. Several boxes of materials Blassingame assembled during his preparation of The Slave Community are now in the collection at the John Hope Franklin Research Center where they can be used by students and scholars of American slavery, especially slavery during the colonial period.

Over the last twenty years of his life, Blassingame dedicated himself to editing the papers of Frederick Douglass; he had co-edited six volumes of Douglass’s manuscripts before his death. Collected in the Blassingame papers are nearly fifty boxes of notes and materials compiled by Blassingame for the Frederick Douglass project, making the John Hope Franklin Research Center a key depository for resources on one of the most influential figures in American history.

Blassingame’s dedication to the collecting and editing of Douglass’s papers evidenced his larger concern that limited and poorly-organized source material had prevented students and scholars from fully understanding the “peculiar institution” of chattel slavery in the southern United States and the subsequent experiences of African Americans in postbellum America. He corrected this deficiency with his 1977 book, Slave Testimony, which comprises over seven hundred pages of previously unpublished material, including slave letters, interviews, and speeches. Slave Testimony is one of the most important sources of documentation of the slave experience published in the twentieth century; the Blassingame papers include materials from this project, as well as additional slavery-era documents.

In addition to materials pertaining to Blassingame’s published work on slavery and antebellum America, the collection of his papers includes research and notes for a project on Blacks and Jews, another of his long-time interests.

Scholars of the African American experience, whether they specialize in antebellum, postbellum, or twentieth-century American history, will find myriad pertinent materials in the Duke collection of Blassingame’s papers.