With twenty-five digital collections on the Web, the Duke University Libraries are recognized for their leadership in the digitization of library materials. But the Duke Libraries’ leadership extends beyond merely making its collections more accessible via the Internet. The Libraries are also establishing digitization procedures and standards and contributing to a national conversation on the possibilities and limitations of digital technology.

The Libraries’ initial involvement with digitization was in some ways more the consequence of serendipity than careful planning. But I like to think that once we began it was nimbleness and a willingness to take chances that led us to explore the new technology with the most ancient of our collections and, further, to do this before the Internet as we know it even existed.

In 1992 the Special Collections Library and Duke’s Department of Classical Studies were working on an NEH-funded project to preserve, photograph and better integrate the Library’s holdings of papyri into the research mainstream by entering records of our holdings into Duke’s online catalog. Our collection of around 1,400 Egyptian papyri, dating from the 12th century BCE to the 10th century of the present era, was an important documentary resource for Coptologists, Egyptologists, students of literature and religion and anyone else interested in ancient Egypt.

Although the materials were rare and unique, we approached the collection as simply another archival resource and created standard catalog records for the items. The project also required that all the pieces in the collection be photographed. We briefly discussed digital scanning (then in its infancy in libraries), but we eventually dismissed the process as being too complex and too expensive.

Concurrent with our papyrus project, the Research Libraries Group selected the Duke Libraries and eight other institutions with significant photography holdings to explore access and description issues for digital photography collections. Each institution submitted 1,000 images from its collections (in Duke’s case, the images were drawn from 14 different collections) on the general theme of the urban landscape. A Texas firm scanned the images and then set about creating an Internet-accessible database that would provide a framework for both describing and viewing the images.

But both the image and papyrus projects were overtaken by rapid advances in Internet technology. In 1993 everyone began talking about Mosaic, the first graphical browser for something called the “World Wide Web.” It became clear to us almost instantly that Mosaic offered a much more dynamic approach to sharing digital images from the papyrus collection. The potential for the image project was the same. After hundreds of hours of work, the Internet image database was nearly complete when someone hesitantly pointed out that if we used the Web we could do everything we had been trying to accomplish on our own and do it much better. The database was scrapped and the project disbanded, though each of the participating institutions took their images back and promptly created websites for them.

Moving the Duke Papyrus Archive to the Web sparked a revolution within the field of papyrology and led to the development of increasingly sophisticated databases. Columbia University now hosts the Advanced Papyrological Information System, which has searchable digital images of virtually every important papyrus collection from around the world in addition to integrated access to important research and editorial tools. Similarly, the Urban Landscape images are now just one small part of the rapidly growing Duke Digital Collections. 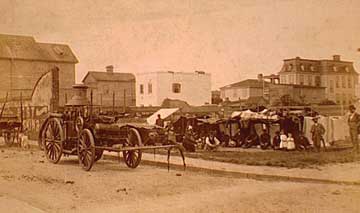 With the success of these projects came the realization that many other collections were also good candidates for digitization—especially those that comprised unique resources and were either heavily used or of special interest to scholars and the public. Over the next few years, the Digital Scriptorium, the unit formed within the Special Collections Library to manage digital projects, undertook collaborations with the Library of Congress American Memory/National Digital Library, creating two sites, Historic American Sheet Music and the Emergence of Advertising in America, the latter drawing on the collections of the Libraries’ John W. Hartman Center for Sales, Advertising and Marketing History. Subsequent partnerships with the Duke Endowment, the Institute for Museum and Library Services, the National Humanities Center, and others supported two more sites devoted to advertising, Ad*Access and Medicine and Madison Avenue, and another dedicated to the work of documentary photographer William Gedney.

While each project has provided lessons and led to advances in technology and project management, overall we have gained an understanding of the great opportunity digitized collections give us for sharing our resources with the world of scholars, students, and the general public. Because the most obvious candidates for digitization are often found in the unique resources in special collections libraries, it has been especially important to develop a common descriptive framework so that all the digitized materials—whether they are papyri, sheet music, documentary photographs, or journals and books—can be searched though a standardized user interface.

Steve Hensen is the head of Technical Services at the Rare Book, Manuscript and Special Collections Library.