“Blessed be the Lord, the God of our fathers,
who let me finish the writing of the Zemmâre and the Mawâs’et
in peace and well-being,
for ever and ever. May it be!”

Magic scrolls, Psalters, prayers, and hymns are among the treasures in a collection of more than one hundred Ethiopic manuscripts at Duke’s Special Collections Library. Christianity was introduced in Ethiopia in the 4th century AD and established by Egyptian missionaries. The Ethiopian Christian church retained its connection to the Patriarch of Alexandria until the 20th century.

The manuscripts at Duke are representative of a worldwide diaspora of the Ethiopian Christian heritage that began in the second half of the twentieth century and continues today. While the removal of the manuscripts from Ethiopia is regrettable, Professor Lucas Van Rompay takes a pragmatic view:

As scholars, we cannot undo the process by which these objects left Ethiopia and arrived here, but we can in our own way halt their movement from their original environment. By giving these objects our respect and scholarly attention and by using all possible modern technologies—such as digitizing—we can help to ensure that they will be available for study and research by the international scholarly community as well as by Ethiopian Christians in Ethiopia and elsewhere.

Van Rompay, a member of Duke’s Department of Religion faculty, and Aaron Butts from the University of Chicago’s Department of Near Eastern Languages and Civilizations intend to do just that—increase visibility of the manuscripts in the Duke collection and make them more readily available. The manuscripts are certainly of value to biblical scholars and to students of early Christianity. However, scholars and students of African history, popular religion, and manuscript production (all the manuscripts are written on parchment and the bindings often have interesting and rare features) will also use them. 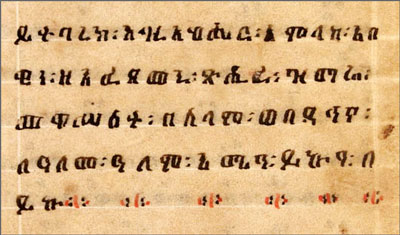 For the past two summers Van Rompay and Butts have been working with the manuscripts, preparing a catalogue of the Duke holdings that will be published in 2010. Their catalogue will supersede an unpublished description of manuscripts 1-29 compiled in 1979 by William F. Macomber, a well-known scholar of Syriac, Coptic, and Ethiopic Christianity; Macomber died in 2008. 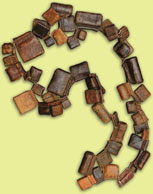 The twenty-nine items Professor Macomber studied include seventeen magic scrolls as well as eight Psalters, one Gospel of John, two collections of prayers, and one collection of the Miracles of the Virgin Mary. Van Rompay and Butts are cataloguing all of the manuscripts Duke has acquired since 1979 as well as the twenty-nine that Macomber described. Among the more recent acquisitions are additional magic scrolls (five with amulets), biblical texts, hymns, liturgical collections and devotional prayer books, hagiography, theological writings, and miscellaneous materials.

Most of the manuscripts date from the 19th or 20th centuries, with only a few originating as early as the 18th century. Yet, while the manuscripts are relatively recent, they are of interest to scholars because of their distinctive characteristics, the textual evidence they contain and the record of Ethiopian Christianity in the modern period that they provide.

The twenty-eight Psalter manuscripts offer much to explore, from textual patterns that almost certainly reflect local religious traditions to a variation in the content of some of the prayers to an occasional unique binding to a single illustrated Psalter. This Psalter, one of only two manuscripts in the collection with illustrations as old as the manuscripts themselves, has a carefully executed drawing of King David holding his harp. The other illustration, in one of the prayer book manuscripts, is a modest, but very fine drawing of the Archangel Michael, with crown and wings and carrying a staff. In both cases, there is a clear connection between the content of the manuscript and the illustration. The rarity and simple character of the illuminations are in keeping with the general nature of the Duke collection, evidence that these manuscripts must have belonged to, and been produced on behalf of, individuals or monastic or church congregations of limited means.

The eight hymn manuscripts in the Duke collection are among its highlights. Several were intended for liturgical use: their script is smaller than that of the other manuscripts, and there is interlinear musical annotation. One collection of hymns is attributed to Yared, the father of Ethiopic hymnography.

Ethiopic hymns are typically structured around the feasts of the liturgical year. Many of the hymns are based on the Bible, both Old and New Testament, and may be seen as liturgical commentaries on the Bible, not unlike the hymns of other Christian churches. The liturgical structure of two of the groups of hymns in the Duke collection is similar to hymn manuscripts in the British Library but with sufficient variation to merit more scholarly attention.

In the field of hagiography, the biography of saints and venerated persons, one noteworthy group of three manuscripts, Dersana Mika’el, is a collection of texts related to the monthly feasts of the Archangel Michael. Each month typically includes a homily, a miracle, a salutation, and often an “explanation of the feast.” This collection is of interest, not only for its obvious links with Coptic and Christian-Arabic homilies about Michael, but also for the homilies’ attributions to church fathers of the early Christian age (Timothy of Alexandria, Epiphanius of Cyprus, and Severus of Antioch) as well as to later Ethiopian authors (John of Ethiopia and John of Aksum). 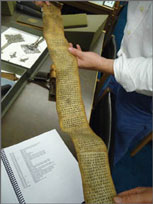 One of the prayer scrolls unrolled
Photo by Eleanor Mills

Duke’s forty-seven magic scrolls, also called prayer scrolls, many acquired bundled together, are of a recent date, although they are written in Ge’ez, a language no longer spoken in Ethiopia but which persists as the Ethiopian Church’s liturgical language. One of the most fascinating aspects of the scrolls is that, in contrast to the manuscripts, the prayers they contain address particular concerns of Ethiopian women, including illness, sterility, and unhappiness in love. Indeed, the prominence of women in these prayer scrolls raises questions that beg for further research. 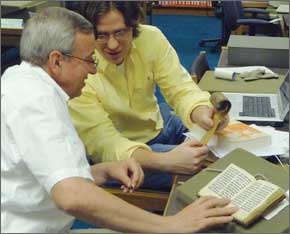 This note is adapted with the permission of Lucas Van Rompay from a lecture he gave at the 2008 annual meeting of the Society of Biblical Literature.