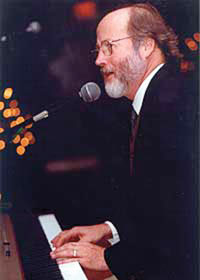 Teacher, writer, and musician Bland Simpson will provide the evening’s entertainment for the 2009 Friends dinner, playing the piano and reading from and discussing his books. The event will be held on Wednesday, 13 May, at the Duke Gardens’ Doris Duke Center. Members of the Friends of the Duke University Libraries should have received invitations to the event. If you did not receive an invitation but would like to attend—even if you are not a member of the Friends, contact Lizzy Mottern at lizzy.mottern@duke.edu or 919.660.5856.

Simpson has been on the faculty of UNC-Chapel Hill’s creative writing program since 1982 and served as the program’s director from 2002 to mid-2008. His books include Heart of the Country, A Novel of Southern Music; The Great Dismal, A Carolinian’s Swamp Memoir; The Mystery of Beautiful Nell Cropsey, A Nonfiction Novel; and The Inner Islands: A Carolinian’s Sound Country Chronicle.

A member of the Tony Award-winning string band the Red Clay Ramblers since 1986, Simpson has toured extensively in North America, Europe, the Middle East and North Africa and has also collaborated on, or contributed to several musicals: King Mackerel & The Blues Are Running: Songs & Stories of the Carolina Coast; Diamond Studs; Hot Grog; Life on the Mississippi; Lone Star Love, The Merry Wives of Windsor, Texas; Tony-nominee Pump Boys & Dinettes; Cool Spring; Tar Heel Voices; Kudzu, A Southern Musical; and three-time Broadway hit and special Tony Award-winning Fool Moon. In September 2002, Simpson worked with the Ramblers on a Waynesville, NC, preview of the Diane Coburn Bruning-choreographed ballet of their music, Ramblin’ Suite. The ballet premiered at the Fox Theater in Atlanta, 31 October-3 November that year. A second Ramblers ballet, Carolina Jamboree, developed and performed with the Carolina Ballet, premiered at Raleigh Memorial Auditorium in February 2005 and was broadcast by UNC TV statewide in early 2006. Carolina Ballet and the Red Clay Ramblers restaged this work in June 2008.

In November 2005 Simpson received the North Carolina Award for Fine Arts, the state’s highest civilian honor. He has also been recognized for his writing and music concerning state and regional heritage in North Carolina.