Internet Sites Selected for the Readers of Duke University Libraries

The Pew Global Attitudes Project, conducted by the Pew Research Center, “is a series of worldwide public opinion surveys that encompasses a broad array of subjects ranging from people’s assessments of their own lives to their views about the current state of the world and important issues of the day. More than 175,000 interviews in 54 countries have been conducted as part of the project’s work.”

This report from June 2008 examines perceptions of the United States abroad. According to its findings, favorable views of the United States have increased modestly since 2007 in 10 of 21 countries where comparative data are available, although many people also feel that the recent economic slump is in no small part due to the United States. The survey also found a widespread belief that United States’ foreign policy “will change for the better” after the inauguration of a new American president next year.

The 150-page report is available in its entirety. In addition to the topics noted above, it covers perceptions of Iran, China, and Asian powers; environmental issues; and governments’ respect for the rights of their people. Finally, visitors can learn about the survey methods used in the creation of this report and view the results in tabular form.

Everyone likes polls, even when they don’t agree with the results. PollingReport.com describes itself as “an independent, nonpartisan resource on trends in American public opinion.” It certainly provides an effective means online for keeping tabs on recent polls. The homepage features random samples of selected polls and summary results of other recently conducted polls. In addition, the homepage highlights broad subject categories: “Elections,” “State of the Union,” “National Security,” “In the News,” and “Issues,” each broken down into narrower topics.

Drilling into the site produces the results of recent polls, plus the questions asked of participants, the polling methodology and sample size. The site also offers visitors a directory, contents page, and search tool, as well as a number of subscription services that are available for an annual fee. 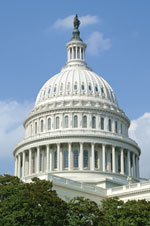 Open Secrets is a free “nonpartisan guide to money’s influence on U.S. elections and public policy,” whose motto is “Count cash and make change.” This is a deep site that provides a great deal of information about contributions to politicians at the federal, state, and local level.

From the homepage, visitors can quickly navigate to details of the financial contributions to presidential candidates, including those who dropped out of the race before the conventions. Also on the homepage are links to congressional and local races and contributions by industry, PACs, lobbyists, and advocacy groups.

Did you know that the average net worth of senators is twice that of members of the House of Representatives? A link to personal financial information allows visitors to search for politicians or the companies in which they have financial interests. Links to “Industries” provides a summary of political giving dating back to 1990, including breakdowns by type of contribution and political party; a list of organizations (usually U.S. companies) that have given the most from that industry; and a list of candidates that have received the most from the industry.

There are many fascinating lines of information to explore on this site. One of the most innovative is the “Money Web,” a social networking tool found under the Politicians & Elections tab/ Presidential that graphically shows connections between candidates and contributors. Click on a bubble and see how the money flows. Use caution, however; as of this writing, the “Money Web” page had not been updated since April.

Thanks to the Internet Scout Project (Copyright Internet Scout Project, 1994-2008. http://scout.cs.wisc.edu/) for identifying these sites. If you would like to recommend a Web site for inclusion in a future issue of Duke University Libraries, contact Joline Ezzell at joline.ezzell@duke.edu.