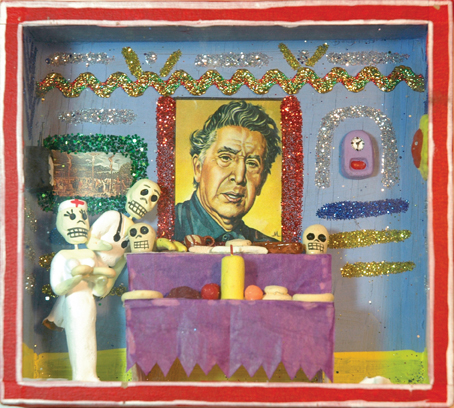 If you were visiting a Latin American country on November 1 (All Saints’ Day) or November 2 (All Souls’ Day), you would probably find yourself caught up in Dia de los Muertos festivities. Dia de los Muertos, or Day of the Dead, is a holiday that honors the dead and celebrates the continuation of life. It is commemorated according to a wide range of customs and beliefs that are often unique to a region. In parts of Mexico, for example, families clean and decorate the graves of loved ones, leaving offerings (ofrenda) of flowers and trinkets and candies. Pan de muerto (bread of the dead) and sugar skulls are also holiday traditions as are altars or shrines that families may erect in their homes.

This year, Duke students will borrow the form of the traditional Latin American Dia De Los Muertos ofrenda to curate an exhibit of altars at Perkins Library. In creating the altars, the students will draw on the collections of the Duke Libraries’ Archive for Human Rights to explore the relationships linking memory, history, community, social action, and power.

Classes participating in the Dia de Los Muertos project are considering a broad range of topics, including human rights in Latin America, contemporary humanitarian challenges, and educational and labor issues facing Latino immigrants here in Durham. In addition to using primary source material in the Libraries’ collections for their projects, students will also have the opportunity to work with groups such as Student Action with Farmworkers, whose records are part of the Libraries’ collections.

The altars the students create will be on display at Perkins Library from Tuesday, October 30 through Sunday, November 4.