Your task: pick a book that everyone at Duke will like.

Started in 2001, the Duke Summer Reading Program offers a shared experience for incoming Duke undergraduates. From The Palace Thief, Ethan Canin’s collection of novellas, to Khaled Hosseini’s NY Times best-seller The Kite Runner, the selections have been varied to match the many interests of the students who will read and discuss them. 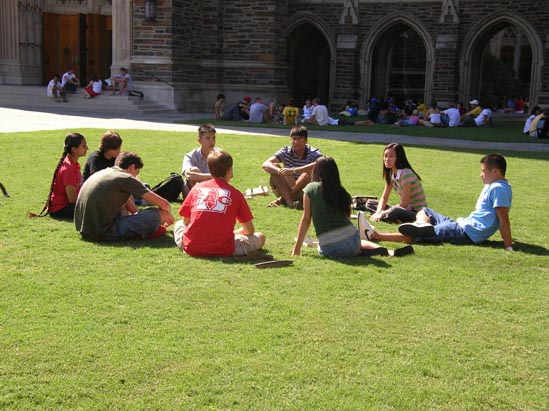 First-year students discuss the selection during orientation, but the reading program also features a campus visit by the author and/or subject of the book for a public conversation. Other events related to the summer reading program have included panel debates on bioethics (My Sister’s Keeper) and visits to journalism seminars by Pulitzer Prize-winning author Tracy Kidder (Mountains Beyond Mountains). Faculty members who work specifically with first-year students in the focus, writing, or first-year seminar programs are invited to weave the selection into their syllabi and plans for the semester.

During the summer before freshmen take up residence on Duke’s East Campus, they receive a copy of the reading selection chosen for their class and information about participating in a discussion of the book during orientation. Although many of the students view this as their ‘first academic assignment,’ the program organizers have a very different perspective.

The selection committee and others involved in the program are thinking broadly about the intellectual growth and mental shifts that occur during an undergraduate’s four years at the university. And they’re keeping in mind that some of the most transformative experiences take place outside the classroom. Late night conversations in the dorms or dining hall or passionate arguments in a tent in K-ville create both meaningful memories and moments when students begin to examine their values and ideals. Fostering these informal, peer-to-peer exchanges is at the heart of the Duke summer reading program. 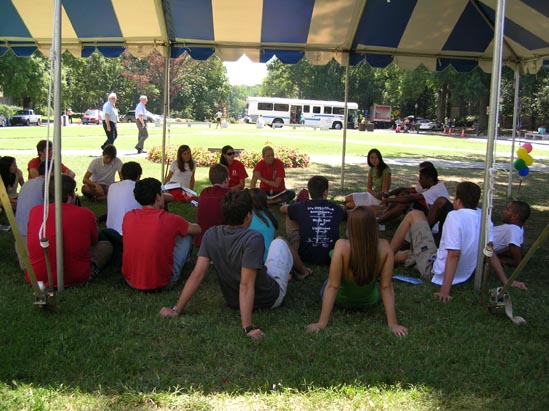 To further empower the first-year students to engage each other in conversations about significant issues, First-Year Advisory Counselors, themselves students, convene and lead the discussions of the summer reading selection. This differs from the practice at other institutions where faculty lead the discussions in similar programs. At Duke, sophomores, juniors or seniors, matched with 8-10 first-year students, find their own time and place.-Some groups talk over a bowl of queso in the ‘dillo, while others find a nice shade tree where they try to beat the late August North Carolina heat. The hope is that this is only the beginning of a college career filled with meaningful conversations, both during classes and also as they come throughout the day.

But these relaxed summertime book talks are only a glimmer in the eyes of the book selection committee members when they begin the search for the next book. The nomination process for Duke’s summer reading selection is open to any member of the campus or local community, although the program is really only marketed on campus. Anyone with a book to suggest can submit their title in the early fall at the summer reading program website. Nominators are asked to explain briefly why their book would be good for the program. The committee reviews every book that is recommended through this process, albeit some with more care than others. No title is discarded without some discussion, even those that are recommended every year!

“I’ll fall on my sword to ensure this is the assigned reading this year!,” declared a faculty member at the second meeting of the book selection committee this year. Members reviewed the initial list of approximately seventy nominations at their first meeting, which occurred between Thanksgiving and winter break. Although the next four weeks would be the prime reading time for committee members, this particular faculty member felt certain that she had already found the winner. Two weeks later, several students on the committee countered her passionate endorsement, arguing that, while the book had merit (after all, it had just been included on the NY Times list of required readings for 2007), it would not capture the interest of typical Duke freshmen. Don’t anoint it just yet, they cautioned; there may be better options. 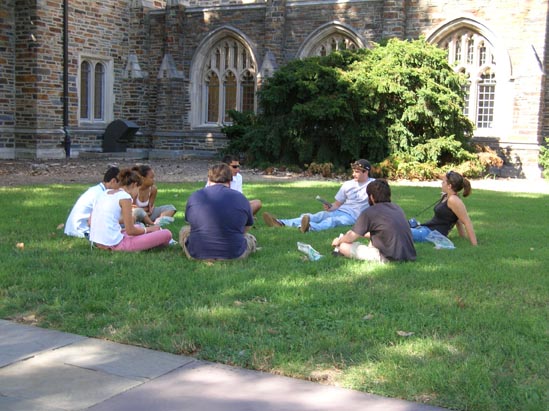 So what makes a book the right choice? The committee considers points ranging from readability and story line to number of pages and topic. What is missing from the consideration, at least at the beginning of the process, is the theme that the committee is ‘hunting’ for. Every year the committee considers entering the process looking for a certain type of book with a theme that we might deem worthy of further exploration by our students. And, annually and unanimously, the committee members decide that they’d rather look for the best book. That’s not to say that theme and messaging don’t enter the selection conversation; they certainly do, but not until the list gets much shorter and the options become more clear.

This is when we start talking seriously about connections that could be made with the book during discussions and throughout the year. This year, more than any other, this conversation has seemed especially relevant. Following a media firestorm in which a gamut of social and campus culture issues have surfaced at Duke, we are asking ourselves how the summer reading program might engage students in conversations that could contribute to improving our campus culture. We have agreed to keep this question in mind as we go through the process. Subsequently, the word ‘opportunity’ has come into our conversation regarding several of the books we’re considering.

Speaking from experience, I can say that the process of selecting the book moves along beautifully. That doesn’t mean that we don’t occasionally have dueling books! The most hotly contested selection was The Kite Runner, which was a last-minute winner over Dead Man Walking. Last year’s selection of My Sister’s Keeper was fiercely debated, too. Mountains Beyond Mountains, on the other hand, was the easiest pick – no other titles came close that year.

The more we read, the more evident it becomes that some titles are rising to the top while others are falling quickly from the list of nominations. Each committee member volunteers to read several books (the number varies depending on the committee member’s regular responsibilities and work load between meetings) and then reports back to the larger group. Based on this report, a book is either removed from consideration or remains on the list for additional reading by other members of the committee. It is conceivable that a book could be removed from consideration after having been read by only one committee member, while those that emerge as contenders are eventually read by the entire group.

The thirteen members of the committee (3 students, 3 faculty members, 4 university staff, and 3 adjunct faculty) are trusted to keep the goals of the program at the forefront of their thinking as they prepare their comprehensive reviews. Some committee members have had to veto an all-time personal favorite because they realized that the book just wasn’t the right fit for the program. This is easy for some, harder for others, but in the end the group has always come together around the final selection.

While the list is being narrowed to the finalists, I am working behind the scenes to determine the availability of books, authors, and peripheral resources for hypothetical selections. One book we’re considering this year is out of print, so while there are still fourteen other options on the list, extensive conversations with press outlets and publishers are already taking place to determine the feasibility of a book that only has a one in fifteen chance of being chosen. It wouldn’t be very prudent of the committee to pick a book that wasn’t available for purchase on a mass scale, just as it wouldn’t be a good idea to pick a title that wouldn’t appeal to an 18-year-old college-bound student.

When the list has been narrowed to 3-5 finalists, these titles are publicized to the broader Duke community for feedback. Not to be mistaken for a vote, this is a chance for those not on the committee to offer their thoughts on the books still on the table. Last year when this step was added to the selection process, the committee received more than a thousand unique visits to its website in a one-week span and several hundred insightful comments about the books that were on the short list. It was a great barometer for the committee to make sure they were on track in thinking about the issues presented in the finalists and how these would resonate with the broader Duke community.

In our first year, The Palace Thief was an early reject, only to be resurrected later in the process and ultimately selected as the program’s inaugural pick. Other selections have been unanimous after a quick process, while some have been made only after multiple votes and even impassioned speeches of support from committee members. This year the selection process seems to be moving at a rapid pace, but it is likely that the committee will debate the final few titles thoroughly.

As the summer reading program has become more firmly established at Duke, campus interest in the books being considered has grown. In the first couple of years, no one cared (or knew) about the book selection process. Now, it’s a hot topic of conversation and is often scrutinized pretty closely. But one thing is certain: The process flows like a good book, with unexpected turns and twists, ups and downs, undeniable tension and joy, but ends, just as it should, in a way that everyone understands and ultimately accepts.

On 8 March the Duke Summer Reading Selection Committee announced that it had chosen The Best of Enemies: Race and Redemption in the New South by Osha Gray Davidson as the “freshman read” book for the Class of 2011. The other finalists were The Omnivore’s Dilemma by Michael Pollan, What is the What by Dave Eggers and Three Cups of Tea by Greg Mortenson and David Oliver Relin.

Best of Enemies describes the history of the civil rights movement in Durham by focusing on the friendship between C.P. Ellis, a one-time KKK member, and Ann Atwater, a civil rights activist, and their work to bridge the racial divide during school desegregation. The book is currently out of print, but the publisher, the University of North Carolina Press, is doing a special reprinting of the paperback edition for Duke that will include an inset letter from President Brodhead. The reprint should be available by May.

Past Selections of the Duke Summer Reading Program