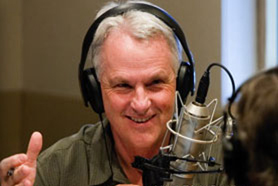 Listeners to WUNC-FM’s The Story, hosted by Dick Gordon, hear about topics discussed on many other radio and television programs, but they hear about those topics from the people at the frontlines of the stories, in their own words—not from writers or policymakers or pundits. Gordon’s guests, encouraged by his interest and thoughtful questions, speak eloquently and often with emotion about how they are being affected by climate change, the war in Iraq, chronic illness, and other aspects of contemporary life.

Dick Gordon will talk about how The Story unfolds and why we listen when he speaks at the 26 April annual dinner meeting (see “Events” for details) of the Friends of the Duke University Libraries. Gordon, who premiered The Story in February 2006, had last been heard on National Public Radio as the host of The Connection from 2001 until 2005.

Prior to going to The Connection, Gordon was senior correspondent, backup host, and reporter for the CBC’s national current affairs radio show. However, Gordon has spent much of his career as a war reporter, covering conflicts in Kashmir, Indonesia, and Sri Lanka, as well as unrest in South Africa, Mozambique, Pakistan, India and the Middle East. He is the recipient of two Gabriel Awards and two National Journalism Awards, and has been nominated twice for the Actra Award for excellence in reporting.