The 5 Titles series highlights books, music, and films in the library’s collection featuring topics related to diversity, equity, inclusion, and/or highlighting the work of authors from diverse backgrounds. Each post is intended to provide a brief sampling of titles rather than a comprehensive overview of the topic. This month, the five titles have been selected by Librarian for Chemistry and Statistical Science Jodi Psoter.

Food and flavor connect us to a place, telling a story of where we come from. For the south and ultimately the entire United States, the influence of enslaved Africans shaped the region’s food. Food and people continued their impact as different waves of immigration influenced the culinary history and culture of the United States. Learn about this significant impact with these five titles that celebrate American foodways. The titles explore food’s significance and its impact in a historic context on capitalism, in culture, on economics, and within gender studies. 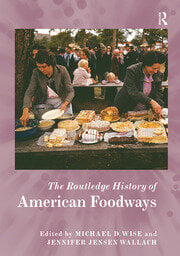 The Routledge History of American Foodways, edited by Michael D. Wise and Jennifer Jensen Wallach (2016). A collection of essays from leading scholars, The Routledge History of American Foodways celebrates food’s journey to and within the Americas. Spanning the pre-colonial era to the present day, the writers combine history with research in food studies to tell food stories. These “twenty-five essays analyze not only how American foodways have changed over the last five centuries, but also how narratives about food in the past continue to shape our present-day food cultures and controversies.” A common theme unites each section of the work. The first section, “Cooking Times,” explores historic foodways during specific eras such as food’s journey during the precolonial period. Key ingredients such as grains and sugars, their arrival in the US, and their impact on how we eat today, are the theme of section two. Section three, “Recipes,” connects the food we eat to its presentation by discussing culture, holidays, tourism, and restaurants. Finally, “Appetites” looks at food in relation to immigration, race, gender, and regionalism. The textbook-style resource can be read cover to cover or on the individual chapter level. 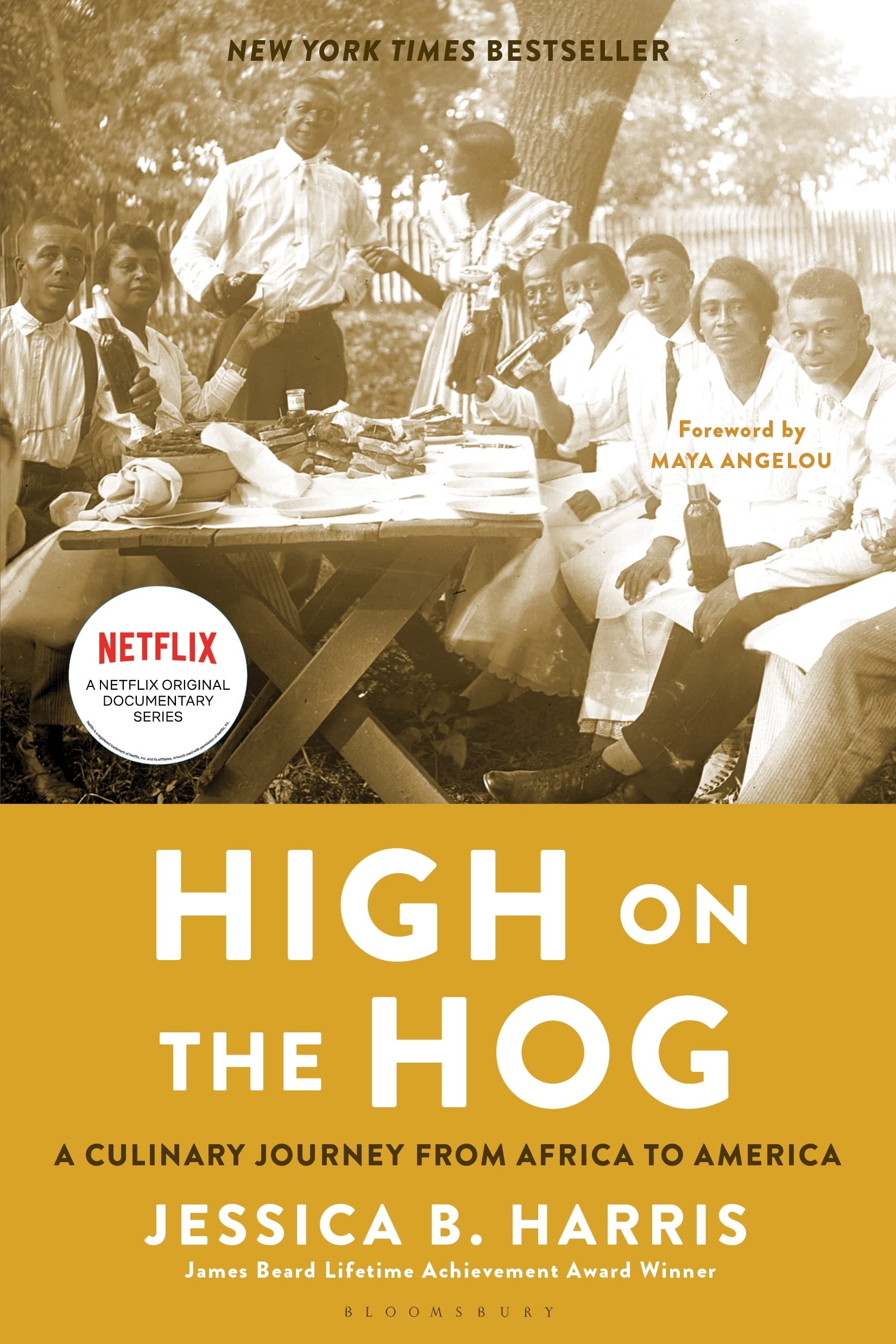 High on the Hog: A Culinary Journey from Africa to America by Jessica B. Harris (2011; also available as an ebook). Professor and author of twelve cookbooks, Harris’s work focuses on foods “originating all over the African continent.” Her research and teaching make her an expert in African American foods, foodways, and their influence on how we eat in the United States. In High on the Hog, Harris shifts her writing style, “construct[ing] an elegant narrative history that connects the culinary experiences of the African and American continents to show how African Americans shaped the country around them.” Written chronologically in chapter form, each chapter is themed and written in three parts. The first part of each chapter is Harris telling a personal story. Part two is really the subject of the chapter: “a topical analysis of African American contributions to American society and culture.” Each chapter ends with a look at a specific food related to the chapter’s theme and time. In 2021, Jessica Harris appeared on Time 100 – the list of the one hundred most influential people in the world. Ten years after publication, Harris’s work continues to teach, now as a food docuseries available on Netflix. Interested in reading more? Search the TRLN libraries to borrow other books by Jessica B. Harris. 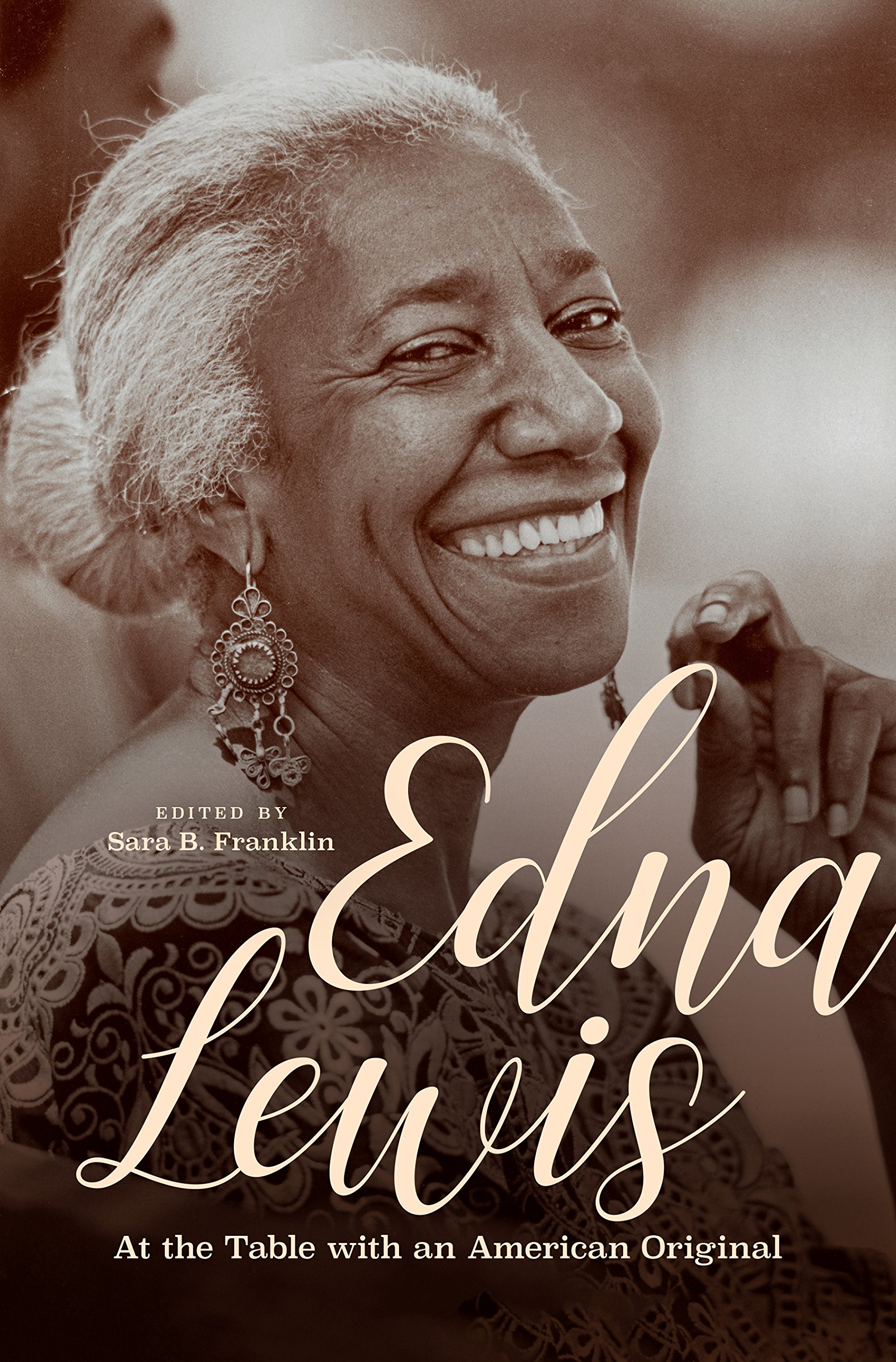 Edna Lewis: At the Table with an American Original, edited by Sara B. Franklin (2018). In this collection of stories, the reader meets Edna Lewis (1916-2006), dressmaker, chef, activist, and one of five chefs whose portrait was featured on a stamp in the US Postal Service’s 2014 “Celebrity Chef Series.” Lewis was also a female, an African American, and a cookbook writer who focused on regional cooking. She cooked seasonally and locally, writing stories to capture memories that describe her childhood and document where she came from. This book is a collection of essays about Lewis written by family, friends, and food world celebrities. They talk of meeting Lewis, their impressions of her, as well as her impact and legacy in food, culture, and women’s history. The resurgence of Edna Lewis as a chef began in 2017 when her cookbook was rereleased on what would have been her one-hundredth birthday, and the television show Top Chef featured a challenge to have the contestants cook a dish inspired by Lewis’ cooking. This tribute to Lewis, viewed by millions, introduced her to a new generation. Lewis’s 1976 cookbook, The Taste of Country Cooking, was published at the same time that another famous female culinary star, Alice Waters, was promoting the farm-to-table movement on the west coast. As you read Edna Lewis: At the Table with an American Original, look for Alice Waters’s “menu to celebrate the anniversary of Edna Lewis’s birth.” 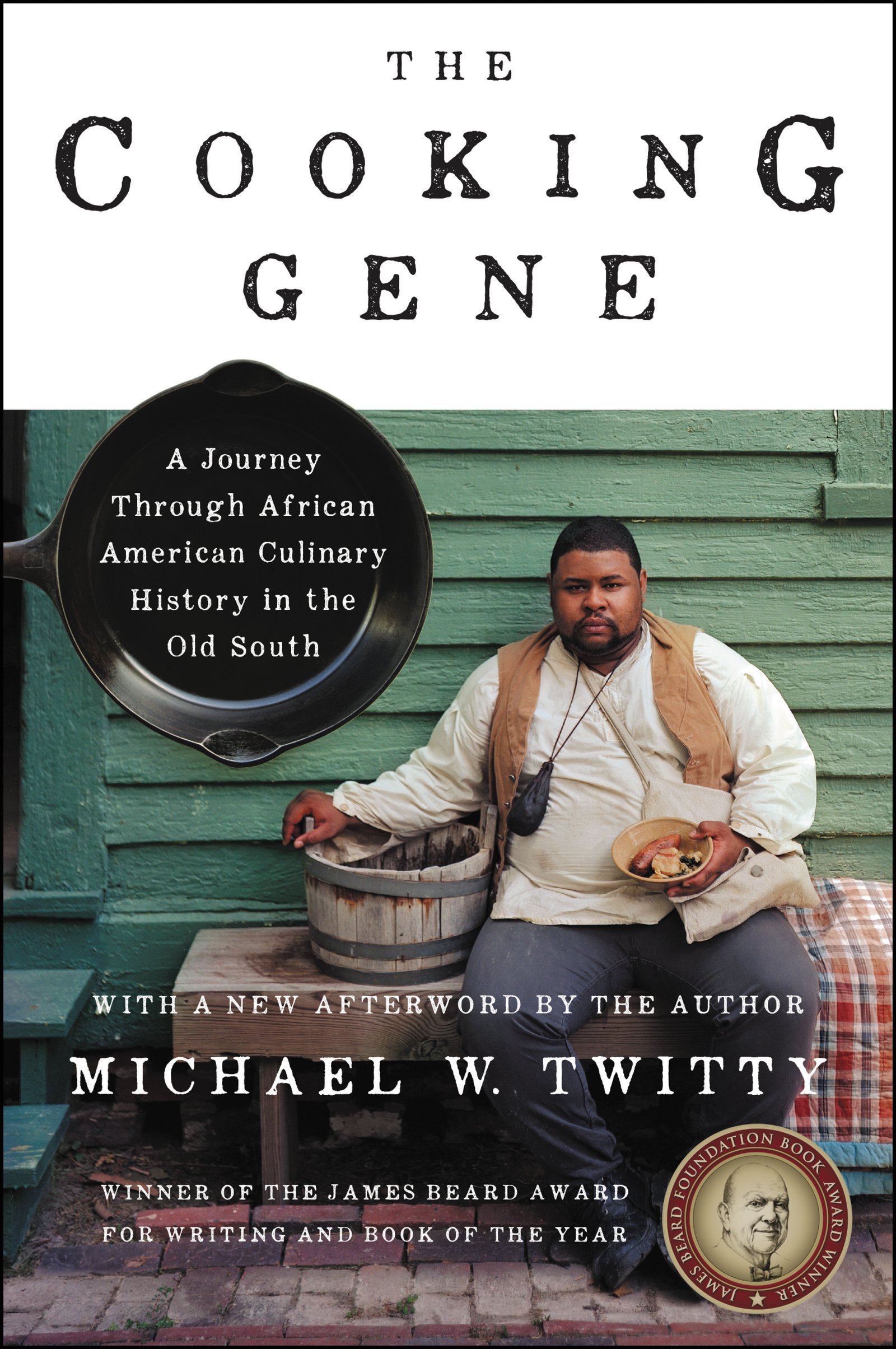 The Cooking Gene: A Journey through African American Culinary History in the Old South by Michael W. Twitty (2017). Awarded the 2018 James Beard Foundation Book of the Year award, The Cooking Gene has been described as “a culinary Roots.” Twitty, a Black, gay, Jewish, culinary historian, seeks to know himself and his own history through the lens of food. This first person narrative focuses on African-American foodways and influence of slavery on southern cooking; an influence described in terms of the mixing of food traditions as cultures and genetics mix. To accomplish this, Twitty “traces [his] ancestry through food and genetic testing.” He writes that his genealogical research “…trace[s] my ancestry to Africa and follow[s] its lineages across the Southern map into the present day. Author of Afroculinaria, a food blog exploring the culinary traditions of Africa, African Americans, and the African diaspora, Twitty not only explores his heritages but also lives it by cooking in costume over a wood fire at historical plantation sites. He writes, “They call this a costume but it is my transformative historical drag; I wear a dusting of pot rust, red clay and the ghost smells of meals past.” Through his heritage, Twitty shines a new light on the traumatic and complicated history of foodways in the South. 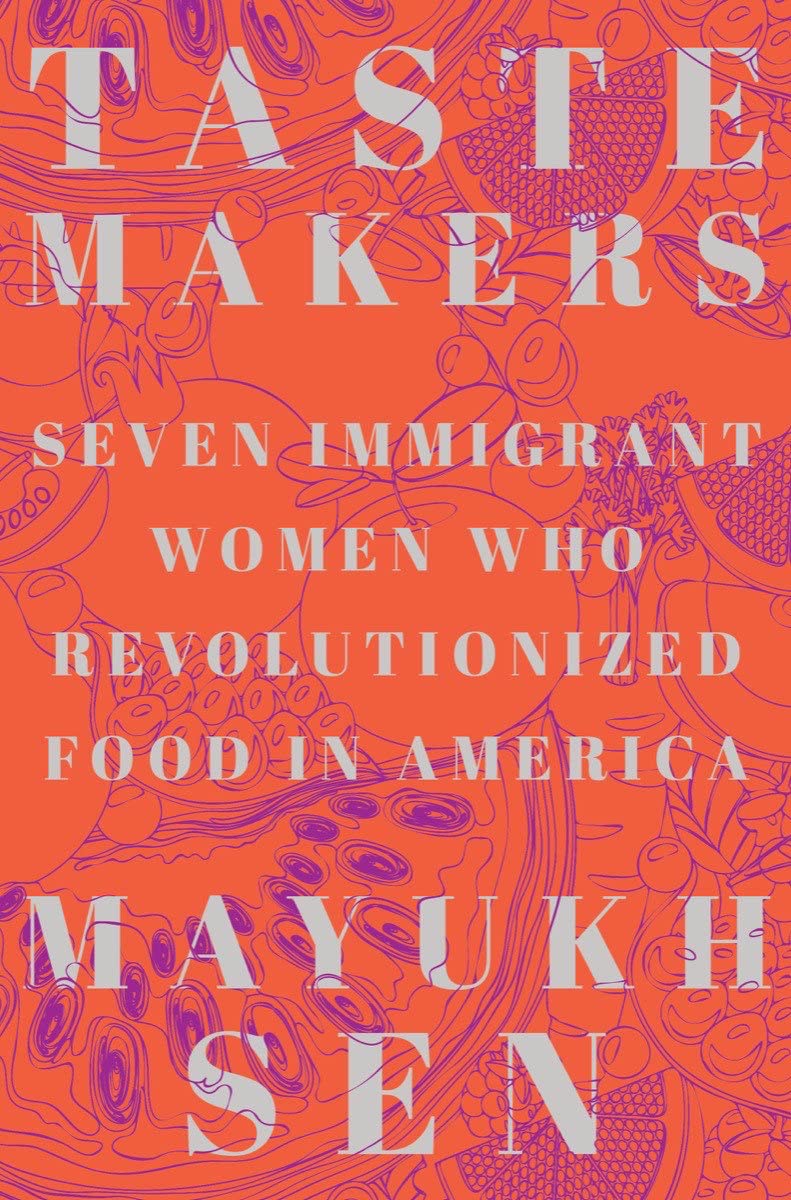 Taste Makers: Seven Immigrant Women Who Revolutionized Food in America by Mayukh Sen (2022). Mayukh Sen, self-described as a queer person of color and a child of Bengali immigrants, chooses to write about women to give voices to people our “culture skews away from.” In this well-researched and well-documented text, Sen introduces the reader, through biographical chapters, to seven immigrant women whose cooking and writing have influenced the “food establishment.” Spanning the period of World War II to the present, the taste makers include: Chao Yang Buwei and her 1945 book How To Cook and Eat in Chinese, Elena Zeleyeta, a Mexican chef who continued to work after losing her eyesight, and French chef Madeleine Kamman, a contemporary of Julia Child. The second part of the book shares the stories of Italian immigrant Marcella Hazan, author of The Classic Italian Cook Book: The Art of Italian Cooking (1973), “The Indian Culinary Authority” in the United States, Julie Shani, Iran’s Najmieh Batmanglij, who writes cookbooks “adapting authentic Persian recipes to tastes and techniques in the West,” and Jamaican chef Norma Shirley. By describing their journey and that of the food of their homeland, Sen shows how the women “used food to construct an identity outside their own country.” As described in the NY Times Book Review, Taste Makers “…embeds these themes within intimate, individual stories as a way to unravel how his subjects’ achievements — and struggles — have contributed to what and how we eat in America today.”