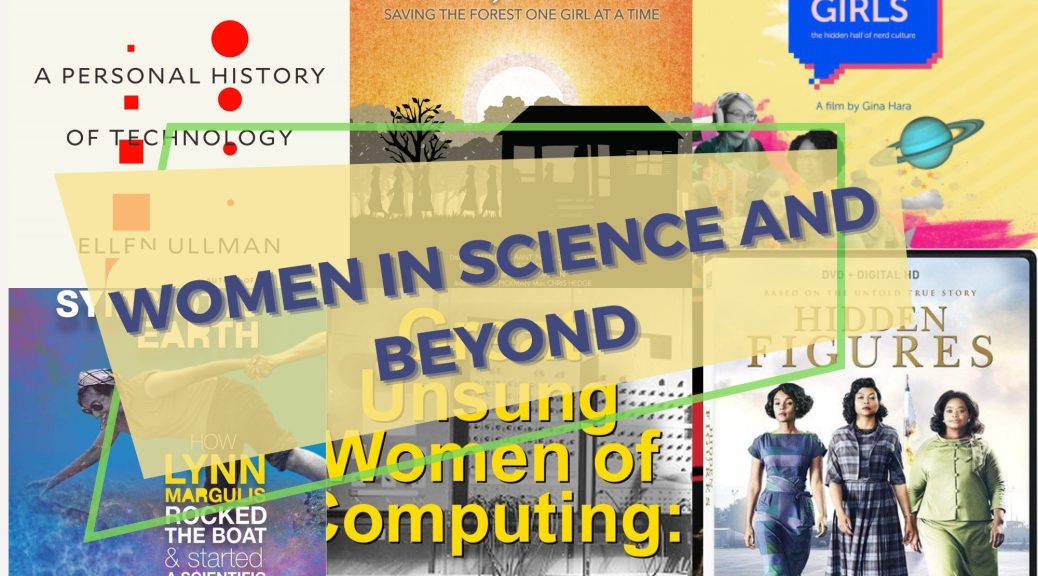 Notable Women in Science and Beyond

Lilly Library celebrates Women’s History Month  by shining our spotlight on Notable Women in Science and Beyond. Films and books that highlight the vital role of women in the sciences as well as other areas of society and culture are featured. Below are just a few of the many titles  – check them out in person or online!

Books about Women in the Sciences

Life in code : a personal history of technology
Pioneering computer programmer Ellen Ullman worked inside the rising culture of technology and the internet. In Life in Code she tells the continuing story of the changes it wrought with a unique, expert perspective.

The code breaker: Jennifer Doudna, gene editing, and the future of the human race
Jennifer Doudna and her colleagues including Emmanuelle Charpentier, won the Nobel Prize in 2020. She and her collaborators turned a curiosity of nature into an invention that will transform the human race: an easy-to-use tool that can edit DNA. Known as CRISPR, it opened a brave new world of medical miracles and moral questions, a life science revolution.

The doctors Blackwell: how two pioneering sisters brought medicine to women–and women to medicine
In 1849, Elizabeth Blackwell became the first woman in America to receive an M.D. She was joined by her younger sister, Emily, who was actually the more brilliant physician. Exploring the sisters’ allies, and challenges, we see a story of trial and triumph. Together, the Blackwells founded the New York Infirmary for Indigent Women and Children, the first hospital staffed entirely by women.

Films about Women in the Sciences … and Beyond

Hidden Figures via Streaming , DVD, Book, or Audio book
NASA found untapped talent in a group of African-American female mathematicians that served as the brains behind one of the greatest operations in U.S. history. Dorothy Vaughan, Mary Jackson, and Katherine Johnson crossed all gender, race, and professional lines while their brilliance and desire to dream big, beyond anything ever accomplished before by the human race, firmly cemented them in U.S. history as true American heroes.

Geek Girls DVD 31054
Filmmaker Gina Hara, struggling with her own geek identity, explores the issue with a cast of women who live geek life up to the hilt: A feminist geek blogger, a convention-trotting cosplayer, a professional gamer, a video-game designer, and a NASA engineer.

Picture a Scientist DVD 33770 or Streaming
This documentary film chronicles the groundswell of researchers who are writing a new chapter for women scientists. A biologist, a chemist and a geologist lead viewers reveal their experiences as they confront brutal harassment, institutional discrimination, and years of subtle slights to revolutionize the culture of science.

We are the Radical Monarchs  Streaming
This film documents the Radical Monarchs–an alternative to the Scout movement for girls of color, aged 8-13. Its members earn badges for completing units on social justice including being an LGBTQ ally, the environment, and disability justice.

Daughters of the Forest  Streaming
This documentary tells the story of a small group of girls in one of the most remote forests left on earth who attend a radical high school where they learn to protect the threatened forest.

The Gender Chip Project DVD 5320
Filmmaker Helen de Michiel documented several young women majoring in the sciences, engineering and math at Ohio State University. They met regularly over their next three years of college, and created a community to share experiences and struggles. This documentary reveals women finding new ways to honor their own growth, motivations and experience as they imagine how to make the science and technology workplace a comfortable environment for women.

Symbiotic Earth : how Lynn Margulis rocked the boat and started a scientific revolution via DVD 31267 or Streaming
Symbiotic Earth explores the life and ideas of Lynn Margulis, a brilliant and radical scientist, whose unconventional theories challenged the male-dominated scientific community and are today fundamentally changing how we look at evolution, the environment, and ourselves.

My Love Affair with the Brain: the life and science of Dr. Marian Diamond  DVD 31280 and Streaming
As one of the founders of modern neuroscience, Dr. Diamond challenged orthodoxy and changed our understanding of the brain–its plasticity, its response to enrichment and to experiences that shape both development and aging.