The 5 Titles series highlights books, music, and films in the library’s collection featuring topics related to diversity, equity, inclusion, and/or highlighting the work of authors from diverse backgrounds. Each post is intended to provide a brief sampling of titles rather than a comprehensive overview of the topic. This month, the five titles have been selected by Stephen Conrad, Team Lead for Western Languages in the Monograph Acquisitions Department.

With Halloween upon us, it seems like a fitting time to showcase five horror films from Black directors. The recent attention garnered by Jordan Peele’s films, and even more recently Nia DaCosta’s Candyman, is certainly warranted, but we’re here to take a dive into some older and perhaps overlooked spooky films lurking in the stacks.

Ganja & Hess, directed by Bill Gunn (1973). A/K/A Blood Couple, a vampiric story of an old dagger’s germs infecting a couple with an insatiable taste for blood. Bill Gunn’s psychedelic, experimental and surreal saga eclipses all bounds of genre and form and has rightfully come to be acknowledged as a masterpiece. Playing the lead role of the anthropologist Hess Green is none other than Duane Jones, who was the iconic and tragi-heroic lead character in George Romero’s classic 1968 Night of the Living Dead. To quote critic James Monaco: “If Sweet Sweetback’s Baadasssss Song is Native Son, Ganja and Hess is Invisible Man.” Also to note, it was remade by Spike Lee in 2014 with the title Da Sweet Blood of Jesus.

Dr. Black, Mr. Hyde, directed by William Crain (1976). In mid-70s Los Angeles. Dr Henry Pride (Bernie Casey) is a successful doctor who develops a formula to cure liver ailments, but with disastrous side effects, especially when he begins experimenting on himself. Once injected, the doctor becomes a murderous white-skinned monster, turning his evil intentions specifically upon pimps and sex workers. The director of 1972’s Blacula crafted his second Blaxploitation horror classic with this take on the Stevenson tale, updated for the streets of Watts. One of the coolest features is extensive inclusion of the Watts Towers towards the end, where Pride/Hyde meets his demise. 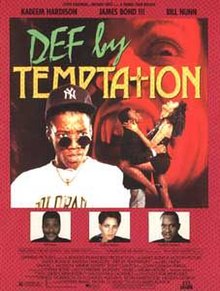 Def by Temptation, directed by James Bond III (1990). A minister-to-be travels from North Carolina to New York City where he encounters a deeply evil succubus prowling on Black men, including his brother, in a swank bar. James Bond III’s only directorial effort, this Troma Films production features a cast that includes Kadeem Hardison, Bill Nunn, Melba Moore, Samuel L Jackson and Freddie Jackson. The neon-strewn sets, inclusion of the comedic and terrific period soundtrack elevate this above the typical Troma schlock fare. But don’t get it twisted, this is still bizarrely gory and gloriously off-kilter. And, it seems like an entire dissertation could be built on the cultural ramifications of Dwayne Wayne, in 1990, being consumed and regurgitated a-la-Cronenberg by a television set that has a cartoonish bust of Ronald Reagan sitting on top of it.

Tales from the Hood, directed by Rusty Cundieff (1995). Four ultra-violent horror vignettes hosted by a Mr. Simms (Clarence Williams III) in his funeral home as he gives a tour and tells tales to three hoods in search of stashed drugs. Director Rusty Cundieff (also at the helm of the riotous 1993 hip hop docu-spoof Fear of a Black Hat) unleashes the stories in classic Tales from the Crypt fashion but with a definite moral bent. Perhaps best of all is the one starring Corbin Bernsen as a flag-clutching racist politician named Duke, who is beset by a foul end at the hands of small dolls in his mansion that was formerly a plantation owner’s house. The segment even manages to tie in media manipulation, reparations, and ancestral folklore. Bonus points for an excellent soundtrack featuring the likes of Wu-Tang Clan and Gravediggaz. 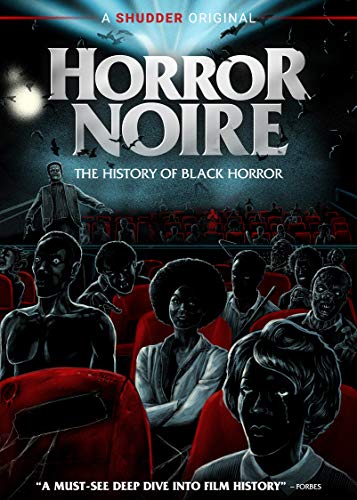 Horror Noire: The History of Black Horror, directed by Xavier Burgin (2019). A documentary survey through the history of Black horror films and the African American role in the genre from Birth of a Nation through the present day. This is a film version of the book by Robin Means Coleman, Horror Noire: Blacks in American Horror Films from the 1890s to Present. A terrific introduction that will surely leave the viewer wanting to watch and know much more.

If you’re looking for more horror films this Halloween, be sure to check out Lilly Library’s current collection spotlight on scary movies, also curated by Stephen Conrad!