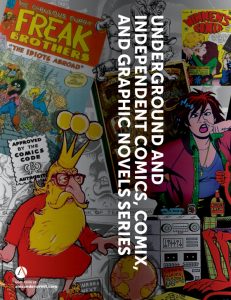 Did you know that Duke University Libraries can provide you with access to a variety of comics and graphic novels?  Keep reading to find out more!

Rare and Original Issues at the Rubenstein Library

The Rubenstein’s comic collection spans many decades, publishers, and styles: from Golden Age Batman to modern graphic novels, and everything in between.

With more than 67,000 comic books from the 1930s to the 2000s, this is our largest collection.  All of the comic book titles are in the process of being added to the library catalog, so you will be able to search the catalog for your favorite superhero!   The titles currently available can also be found in the catalog by searching for “Edwin and Terry Murray Collection (David M. Rubenstein Rare Book & Manuscript Library).”   You can try searching by genres, such as “Detective and mystery comics” and  “Underground comics,” as well.

Contains thousands of additional comics and graphic novels with rich materials in international comics, especially Argentina and France, and comics created by women.  Find them in the Guide to the Comic Book and Graphic Novel Collection, 1938-2012.

The Underground and Independent Comics Database

The Underground and Independent Comics database is the first-ever scholarly online collection for researchers and students of adult comic books and graphic novels. It features the comics themselves along with interviews, commentary, and criticism. Includes artists such as Jessica Abel, Jaime Hernandez, Jason, Harvey Pekar, Dave Sim, and many more. There are comics from around the world, including Canada, France, Italy, Spain, England, Sweden, Norway, Australia, Korea, Japan.

Comics and Graphic Novels in the Stacks

There are several ways to identify titles.  If you want to browse, relevant call number sections include PN6700-6790 and NC1300-1766. You can do a title search in our library catalog for specific titles.   You can also use the subject headings Comic books, strips, etc. and graphic novels to discover more titles.

We have manga in the East Asian collection on the second floor of Bostock.  We hold about 600 titles in Japanese and 150 titles translated into English just in PN6790.J3 – PN6790.J34.  You can also find Korean manhwa in PN6790 K6 – PN6790.K64.  Popular titles held at Duke include One Piece, Dragon ball, Naruto, Astro Boy, as well as the complete works of Tezuka Osamu.

Come Visit Us This Week!

We’ll have a table outside of the Perk on Tuesday March 28th from 1-2 and on Wednesday March 29th from 11-12.  We’ll be showing off some of the works in our collections, demonstrating The Underground and Independent Comics database, and answering questions!