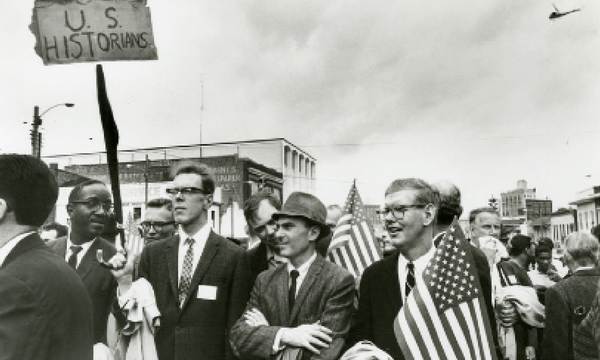 What: Opening of Franklin Gallery
When: Wednesday, October 19, 4:30-6:30 p.m.
Where: Carr Building, East Campus (map)
Who: Free and Open to the Public

A new exhibit space on Duke’s East Campus will debut this month with a display of historical visual materials from the David M. Rubenstein Rare Book & Manuscript Library.

The Franklin Gallery, named in honor of legendary historian and Duke professor John Hope Franklin, is located in the Carr Building, home of Duke’s history department. The new space will be devoted to displaying visual materials of historical importance.

A public event celebrating the opening of the new gallery space will take place on Wednesday, October 19, from 4:30 to 6:30 p.m.

Two of the inaugural exhibits in the Franklin Gallery will feature items from important collections in the Rubenstein Library. John Gartrell, Director of the Rubenstein Library’s John Hope Franklin Research Center, has curated one of them. “John Hope Franklin: Imprint of an American Scholar” features photographs and related materials that illustrate Professor Franklin’s impact as a scholar and public intellectual.

Duke History Professor Sucheta Mazumdar has prepared another exhibit, displaying Chinese posters from the Rubenstein Library’s collections that portray the period of the Cultural Revolution. These posters, such as the one below, feature themes of solidarity among races and classes in society.

Throughout the year, the Franklin Gallery will be open during the Carr Building’s normal hours. The opening event on October 19 is free and open to the public.