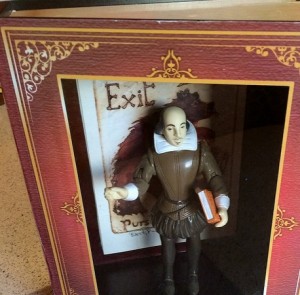 Shakespeare’s plays have been adapted for many different periods, countries, and media.

Most obviously his plays have been produced on the stage in a variety of ways.  Some stage productions try to perform  the play as close to the original as possible, some decide to work with all female casts, and some set their productions in specific time periods, like the roaring 20’s or World War Two.  One way to see the different kinds of productions is to read stage histories.  In particular you might enjoy Shakespeare: An Illustrated Stage History.

Of course there have also been many film adaptions, many of which we own at Lilly Library.  Don’t forget too the classical music, operas, other plays, television, and musicals that have been based on Shakespeare’s plays!

I personally enjoy fiction adapted (or even just inspired by) from Shakespeare, including the new Hogarth Shakespeare series.  We already have Jeanette Winterson’s The Gap of Time: The Winter’s Tale Retold, and I’m especially looking forward to Margaret Atwood’s take on The Tempest.

Here are a few more titles to look for:

A Thousand Acres by Jane Smiley.  A successful Iowa farmer decides to divide his farm between his three daughters. When the youngest objects, she is cut out of his will. This sets off a chain of events that brings dark truths to light and explodes long-suppressed emotions. An ambitious reimagining of Shakespeare’s King Lear cast upon a typical American community in the late twentieth century, A Thousand Acres takes on themes of truth, justice, love, and pride, and reveals the beautiful yet treacherous topography of humanity.

Prospero’s Daughter by Elizabeth Nunez.  A brilliantly conceived retelling of Shakespeare’s The Tempest set on a lush Caribbean island during the height of tensions between the native population and British colonists.

The Weird Sisters by Eleanor Brown.  The Andreas family is one of readers. Their father, a renowned Shakespeare professor who speaks almost entirely in verse, has named his three daughters after famous Shakespearean women. When the sisters return to their childhood home, ostensibly to care for their ailing mother, but really to lick their wounds and bury their secrets, they are horrified to find the others there.

The Madness of Love by Katharine Davies.  Takes inspiration from Shakespeare’s Twelfth Night and raises the curtain on the interconnecting lives and loves of an unforgettable cast of characters.

Mama Day by Gloria Naylor.  The story, which makes many allusions to the dramatic works of Shakespeare, focuses upon the tragic love affair of “star-crossed” lovers Ophelia “Cocoa” Day and George Andrews.

Gertrude and Claudius by John Updike.  Tells the story of Claudius and Gertrude, King and Queen of Denmark, before the action of Shakespeare’s Hamlet begins. Employing the nomenclature and certain details of the ancient Scandinavian legends that first describe the prince who feigns madness to achieve revenge upon his father’s slayer, Updike brings to life Gertrude’s girlhood as the daughter of King Rorik, her arranged marriage to the man who becomes King Hamlet, and her middle-aged affair with her husband’s younger brother.

Wise Children by Angela Carter.  In their heyday on the vaudeville stages of the early twentieth century, Dora Chance and her twin sister, Nora―unacknowledged daughters of Sir Melchior Hazard, the greatest Shakespearean actor of his day―were known as the Lucky Chances, with private lives as colorful and erratic as their careers.