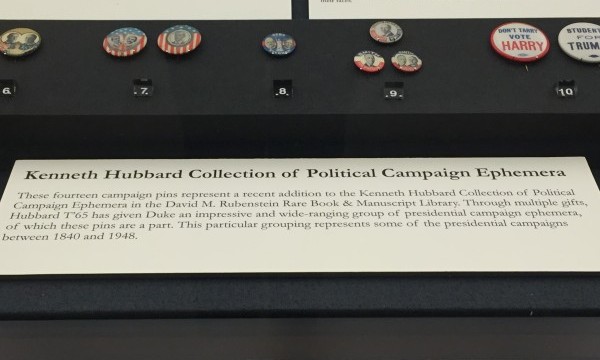 Why does this beautifully crafted lapel pin connect Harrison’s name with reform? Such questions provide a good deal of the appeal of fourteen campaign pins on display as part of the Kenneth Hubbard Collection of Political Campaign Ephemera in the Rubenstein Rare Book & Manuscript Library. In the current season of election news, Hubbard, a Duke alumnus and donor, has provided tokens of particular interest in contextualizing some notable presidential campaigns between 1840 and 1948.

William Henry Harrison’s is a name to ponder. Some might recognize that he was a President before the American Civil War. The alliteration of his name may sound familiar. Fewer could identify him as hero of the Battle of Tippecanoe, though more would recognize the campaign slogan “Tippecanoe and Tyler too,” referring to Harrison and his running mate, and successor.  Harrison, the oldest person elected President until Ronald Reagan, died from pneumonia contracted at his inauguration after serving fewer than forty days. 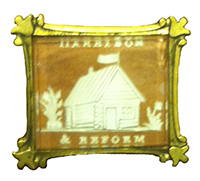 “Reform,” in Harrison’s campaign of 1840, was economic reform required as a result of a protracted depression known as the “Panic of 1837.”  Over a third of American banks in New York and elsewhere faltered and then failed after President Andrew Jackson’s administration decentralized the Federal banking system and British banks raised interest rates in response to perceived risk. Jackson’s Democratic successor, Van Buren, was unable to correct the economic course and prices for important agricultural export products like cotton plummeted. Whether Harrison’s Whig reforms would have been effective is questionable. The severe economic downturn lasted until 1844.

Like the Harrison pin, each of the items on display in the Rubenstein is interesting in its own right. A few have great aesthetic appeal like the Harrison pin. Other buttons illustrate powerful personalities and world-changing events. One particularly rare pin is from the only presidential campaign in which the candidate was running while serving a term in federal prison!