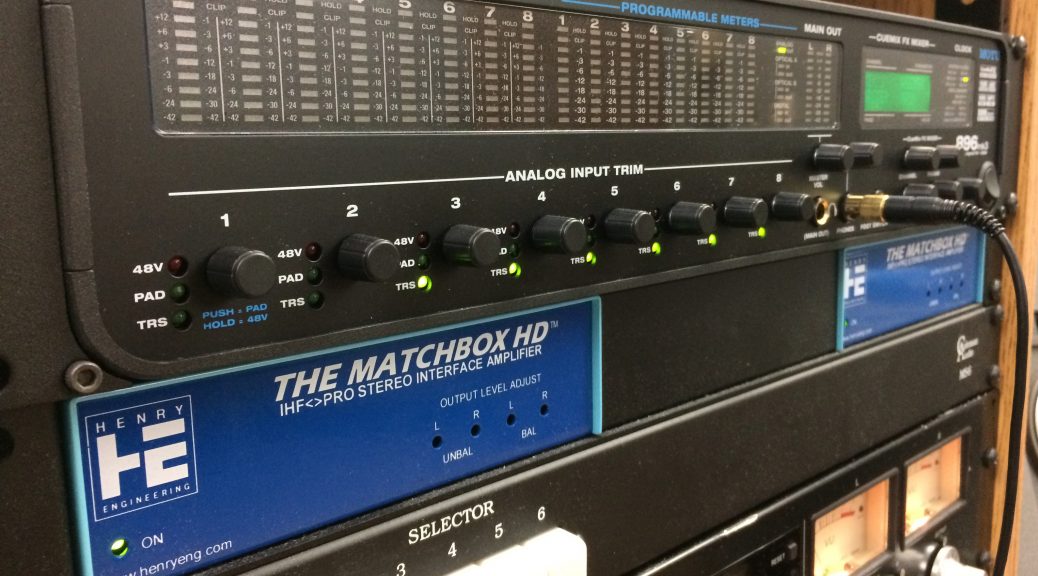 In the audio world, we take our tools seriously, sometimes to an unhealthy and obsessive degree. We give them pet names, endow them with human qualities, and imbue them with magical powers. In this context, it’s not really strange that a manufacturer of professional audio interfaces would call themselves “Mark of the Unicorn.”

Here at the Digital Production Center, we recently upgraded our audio interface to a MOTU 896 mk3 from an ancient (in tech years) Edirol UA-101. The audio interface, which converts analog signals to digital and vice-versa, is the heart of any computer-based audio system. It controls all of the routing from the analog sources (mostly cassette and open reel tape decks in our case) to the computer workstation and the audio recording/editing software. If the audio interface isn’t seamlessly performing analog to digital conversion at archival standards, we have no hope of fulfilling our mission of creating high-quality digital surrogates of library A/V materials.

While the Edirol served us well from the very beginning of the Library’s forays into audio digitization, it had recently begun to cause issues resulting in crashes, restarts, and lost work. Given that the Edirol is over 10 years old and has been discontinued, it is expected that it would eventually fail to keep up with continued OS and software updates. After re-assessing our needs and doing a bit of research, we settled on the MOTU 896 mk3 as its replacement. The 896 had the input, output, and sync options we needed along with plenty of other bells and whistles.

I’ve been using the MOTU for several weeks now, and here are some things that I’m liking about it:

I haven’t had a chance to explore all of the additional features of the MOTU yet, but so far it has lived up to expectations and improved our digitization workflow. However, in a production environment such as ours, each piece of equipment needs to be a workhorse that can perform its function day in and day out as we work our way through the vaults. Only time can tell if the Mark of the Unicorn will be elevated to the pantheon of gear that its whimsical name suggests!