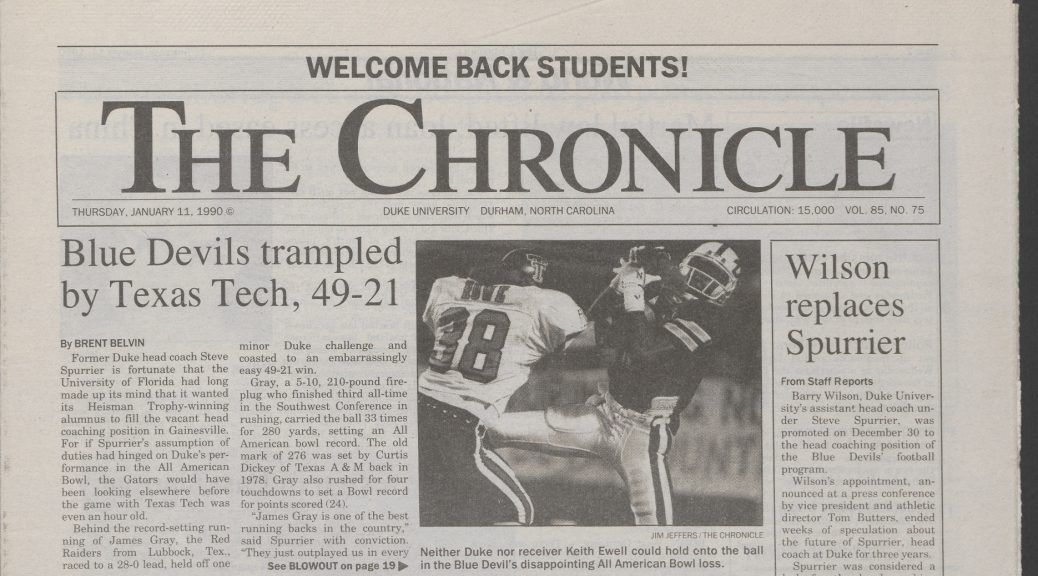 Exciting news from Digital Collections! The 1990’s decade of The Duke Chronicle is being prepped for completion. It has been nine months since I started scanning The Chronicle, and I have come across some interesting stories and images. Despite the fact that I can’t digest the 1990’s being twenty years ago, flipping through the pages brought back some good memories of those days. They also brought some perspective of events I was too young, and too focused on the new trendiest toy, to recall.

It all falls down

As I’m sure some of you remember, in the 1990’s, the world saw the slow destruction of the massive empire that was the Soviet Union. I was much too young to remember the monumental days of the fall of the Berlin Wall and the gradual independence of the Eastern European nations, but the students at Duke were old enough to witness and digest it. Apparently, there was such an interest in the topic that course enrollments skyrocketed in some areas. Since the situation was so new at the time, professors did not have any readings to assign, and previous course materials were made obsolete! I could see myself being one of the many students signing up for these courses. Barbecue or peace of mind

Another random yet interesting article I found involved hog farms in North Carolina. Allegedly, the smell was so bad and spread so wide that neighbors were experiencing mood changes. A medical psychology professor completed an odor study, and found people were more depressed, angry and tired compared to people who didn’t live near hog farms. It became enough of an issue for local residents to file a lawsuit against the nearby hog farms. Although I have never lived near a hog farm, if I had to smell feces, urine and hog feed every time I came home, I don’t think I would be a happy camper either. We have come so far

This particular article hit close to home. The University Archives were worried about navigating the preservation of important emails and other electronic documents. They discussed printing emails back in 1999, but we have now moved on to preserving electronic records in their original form. There are even courses dedicated to the subject in the archival field. It’s funny reading this article after scanning it for the very same purpose. Preservation. Back in the day

Some more goodies I noticed while scanning this project.

Did anyone have any of these state of the art electronics? Ohh, so this is how you found out what classes were available. I know the students, faculty and staff of the ’90s will probably get a kick out of viewing these old newspaper issues, but I’m sure everyone else will enjoy reading through The Chronicle too. While you wait for the 1990’s to be made available publicly, take a look  at the current digitized Chronicle collection.