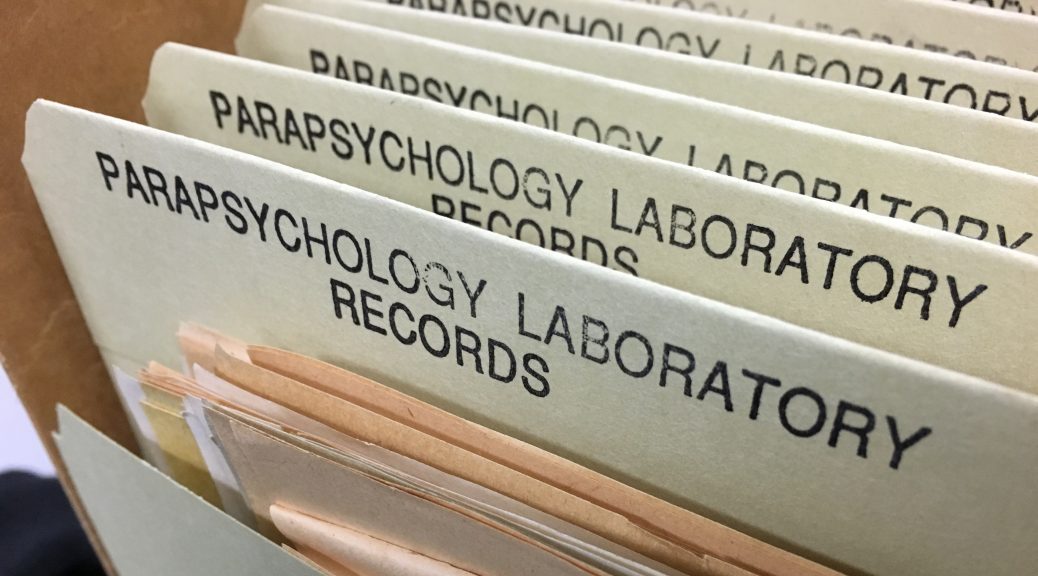 Every Halloween at Duke Libraries, we have our annual “Screamfest.” This is when the David M. Rubenstein Rare Book & Manuscript Library shows off unique holdings related to extrasensory perception, premature burial, 16th century witches, devils (not just blue ones), creepy advertisements, eerie pulp fiction, scary zines and more. Attendees sometimes show up in costumes, and there is of course, lots of candy. I always eat too much.

When I look through the various materials on display, there is one item in particular that always seems to draw me in. In fact, you could say I am compelled to read it, almost as if I am not in control of my actions! It’s a simple one-page letter, written in 1949 by Luther M. Schulze, a Lutheran pastor in Washington, D.C., addressed to J.B Rhine, the scientist who founded parapsychology as a branch of psychology, and started the Duke Parapsychology Laboratory, which operated at Duke University from 1935 until the 1960’s. Parapsychology is the study of phenomena such as telepathy, clairvoyance, hypnosis, psychokinesis and other paranormal mysteries.

The letter begins: “We have in our congregation a family who are being disturbed by poltergeist phenomena. It first appeared about January 15, 1949. The family consists of the maternal grandmother, a fourteen (year) old boy who is an only child, and his parents. The phenomena is present only in the boy’s presence. I had him in my home on the night of February 17-18 to observe for myself. Chairs moved with him and one threw him out. His bed shook whenever he was in it.” The letter also states that his family says that “words appeared on the boy’s body” and he “has visions of the devil and goes into a trance and speaks in a strange language”

As a fan of classic horror films, this letter immediately reminded me of what is generally regarded to be the scariest movie of all time, “The Exorcist.” I was too young to see the film when it was originally released in 1973, but got the chance to see the director’s cut on the big screen in 2000. It’s definitely the scariest movie of all time, but not because of gratuitous gore like you see in today’s monotonously-sadistic slasher films. The Exorcist is the scariest movie ever because it expertly taps into one of the central fears within our Judeao-Christian collective subconscious: That evil isn’t just something we battle outside of ourselves. The most frightening evil of all is that which can take root within us.

It turns out there’s a direct link between this mysterious letter to J.B Rhine and “The Exorcist.” William Peter Blatty, who wrote the 1971 novel and adapted it for the film, based his book on a real-life 1949 exorcism performed by Jesuit priests in St. Louis. The exorcism was performed on a 14-yr-old boy under the pseudonym of “Roland Doe” and that is the same boy that Rev. Schulze is referring to in his letter to J.B. Rhine at Duke. When Rhine received the letter, Roland’s family had taken him to St. Louis for the exorcism, having given up on conventional psychiatry. Blatty changed the gender and age of the child for his novel and screenplay, but many of the occurrences described in the letter are recognizable to anyone familiar with the book or movie.

Unfortunately for this blog post, poltergeists or demons or psychosomatic illnesses (depending on your point of view) often vanish as unexpectedly as they show up, and that’s what happened in this case. After an initial reply to the letter from L.E. Rhine, his wife and lab partner, J.B. Rhine responded to Rev. Schulze that he was “deeply interested in this case,” and that “the most likely normal explanation is that the boy is, himself led to create the effect of being the victim of mysterious agencies or forces and might be sincerely convinced of it. Such movements as those of the chair and bed might, from your very brief account of them, have originated within himself.” Part of the reason Rhine was successful in his field is that he was an empirical skeptic. Rhine later visited Schulze in person, but by then, the exorcism had ended, and Roland’s condition had returned to normal.

According to subsequent research, Roland married, had children and leads a quiet, ordinary life near Washington, D.C. He refuses to talk about the events of 1949, other than saying he doesn’t remember. In the mid-1960’s, Duke and J.B. Rhine parted ways, and the Duke Parapsychology Lab closed. This was likely due in part to the fact that, despite Rhine’s extensive research and empirical testing, parapsychology was, and still is, considered a dubious pseudoscience. Duke probably realized the association wasn’t helping their reputation as a stellar academic institution. The Rhines continued their research, setting up the “Foundation for Research on the Nature of Man,” independently of Duke. But the records of the Duke Parapsychology Laboratory are available for study at Duke Libraries. I wonder what other dark secrets might be discovered,  brought to light and exorcized?

One thought on “The Letter Compels You!”