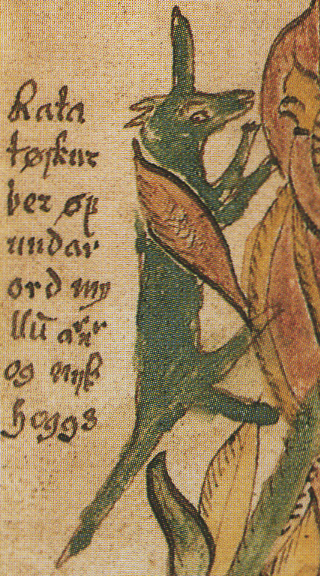 One thing I’ve learned on my life’s journey is the importance of knowing your spirit guide.

That’s why, by far the most important point that I made in a talk at the TRLN Annual Meeting in July is that the spirit guide of the digital repository movement is the squirlicorn. The squirlicorn perfectly captures the nature of working on digital repositories, for two main reasons:

I thought I would use this post to share some of the things that you might not know about the squirlicorn, spirit guide of the digital repository.

In olden days, the squirlicorn was known to the authors of the Poetic Edda in the character of Ratatoskr, a horned squirrel who traversed the Tree of the World, carrying insults and trash talk between the wise eagle who perched at the top and the ravenous dragon coiled around the root.

Quoting from the Wikipedia caption for the image at left:

A 17th century Icelandic manuscript depicting Ratatoskr. Although unexplained in the manuscript and not otherwise attested, in this image Ratatoskr bears a horn or tusk.

Ratatoskr’s behavior should be completely familiar to those of us who work in the digital repositories game, as we ourselves are well known for moving between the subterrane and the aery heights, and for our trash talk.

Many people observe and recognize the wondrous spirit of the squirlicorn by placing totemic objects in their yards.

3) Squirlicorn is voiced by the renowned British actress, Helen Mirren.

Homer Simpson’s space coyote spirit guide was voiced by Johnny Cash, which I have to admit, is pretty much killer. But Squirlicorn is voiced by someone equally awesome, as seen in the clip below.

4) Squirlicorn’s theme song is Funkadelic’s “Can You Get to That,”

It’s all about paying it forward.

Now that you know all about Squirlicorn, and its spiritual connection to the digital repository, go out into the world, and teach others of our lore and our ways. Happy Labor Day!

One thought on “Squirlicorn, spirit guide of the digital repository: Four things you should know”