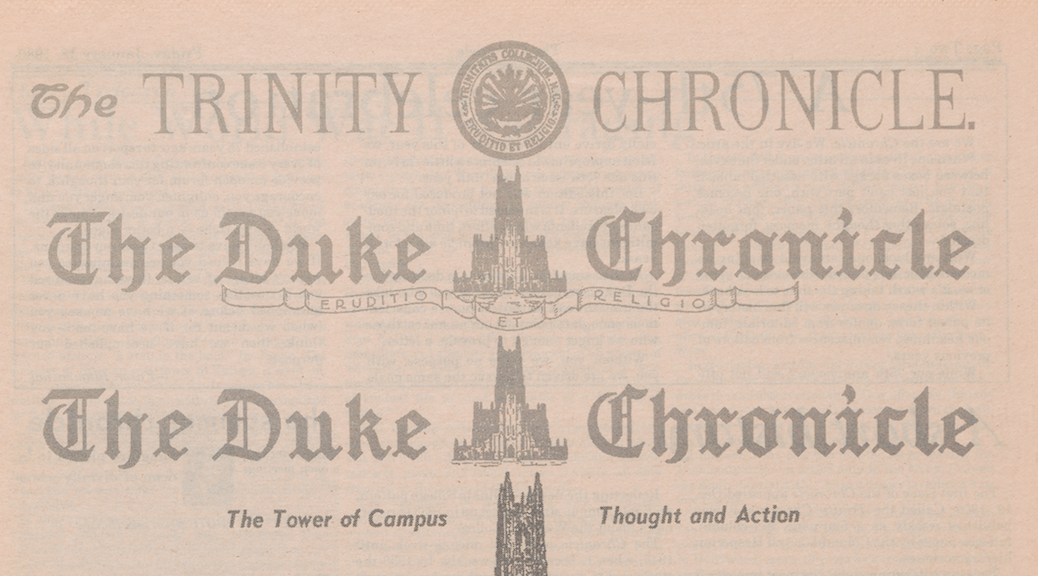 The 1905 to 1939 Chronicle issues are now live online at the Duke Chronicle Digital Collection. This marks the completion of a multi-year project to digitize Duke’s student newspaper. Not only will digitization provide easier online access to this gem of a collection, but it will also help preserve the originals held in the University Archives. With over 5,600 issues digitized and over 63,000 pages scanned, this massive collection is sure to have something for everyone.

The first two decades of the Chronicle saw its inception and growth as the student newspaper under the title The Trinity Chronicle. In the mid-1920s after the name change to Duke University, the Chronicle followed suit. In Fall of 1925, it officially became The Duke Chronicle.

The Nineteen-teens saw the growth of the university, with new buildings popping up, while others burned down – a tragic fire decimated the Washington Duke Building.

The 1920s was even more abuzz with construction of West Campus as Trinity College became Duke University. This decade also saw the death of two Duke family members most dedicated to Duke University, James B. Duke and his brother Benjamin N. Duke.

In the shadow of the Great Depression, the 1930s at Duke was a time to unite around a common cause – sports! Headlines during this time, like decades to follow, abounded with games, rivalries, and team pride.

Take the time to explore this great resource, and see how Duke and the world has changed. View it through the eyes of student journalists, through advertisements and images. So much occurred from 1905 to 1989, and the Duke Chronicle was there to capture it.