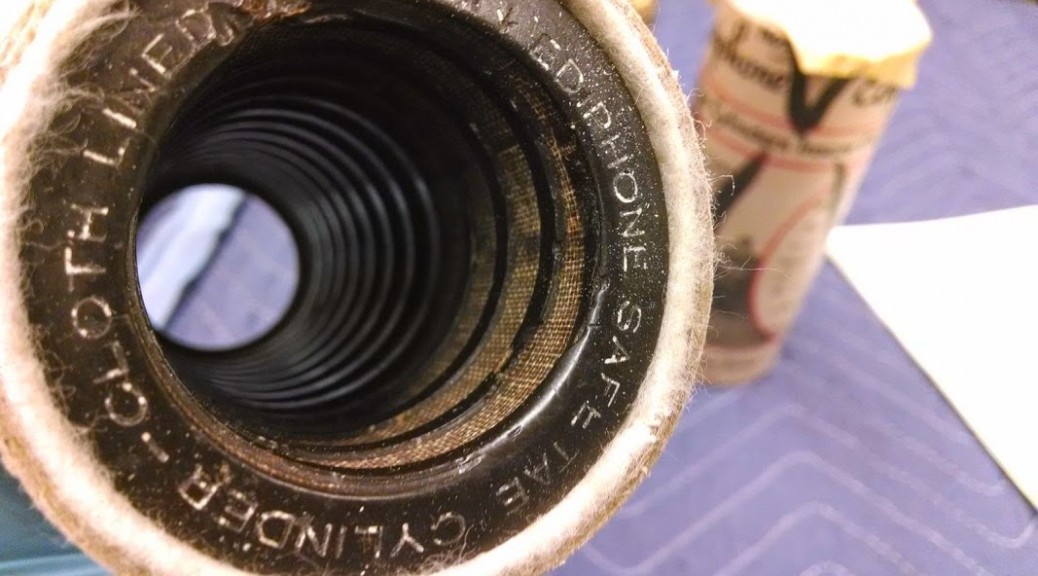 My last several posts have focused on endangered–some would say obsolete–audio formats: open reel tape, compact cassette, DAT, and Minidisc. In this installment, we travel back to the dawn of recorded sound and the 20th Century to investigate some of the earliest commercial recording media. Unlike the formats above, which operate on post-WW2 magnetic and optical technology, these systems carved sound waves into stone (or, more accurately, wax) behind strictly acousto-mechanical principles.

Thomas Edison is credited as inventing the first phonograph (“soundwriter”) on July 18, 1877. It consisted of tinfoil wrapped around a hand-cranked metal cylinder. Sound waves would be funneled through a horn, causing a stylus to vibrate and indent a groove around the outside of the cylinder. The cylinder could be played by reversing the procedure: By retracing the groove with the stylus, the sound would be amplified back through the horn and heard as a rough approximation of the original sound. 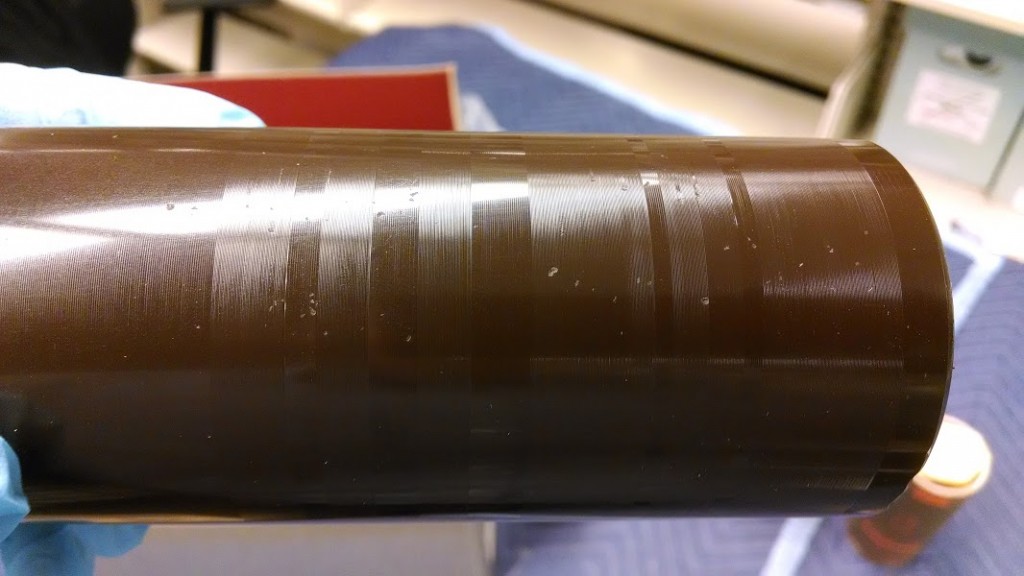 Alexander Graham Bell quickly improved the innovation by introducing wax as a superior material for the cylinders and using a needle to scratch the sound waves into their surface. He called his device the “Graphophone”. By 1888, Edison had also adopted wax as the preferred medium for recorded cylinders and a patent-sharing agreement was signed. In 1889, the wax cylinder because the first commercially marketed audio medium. 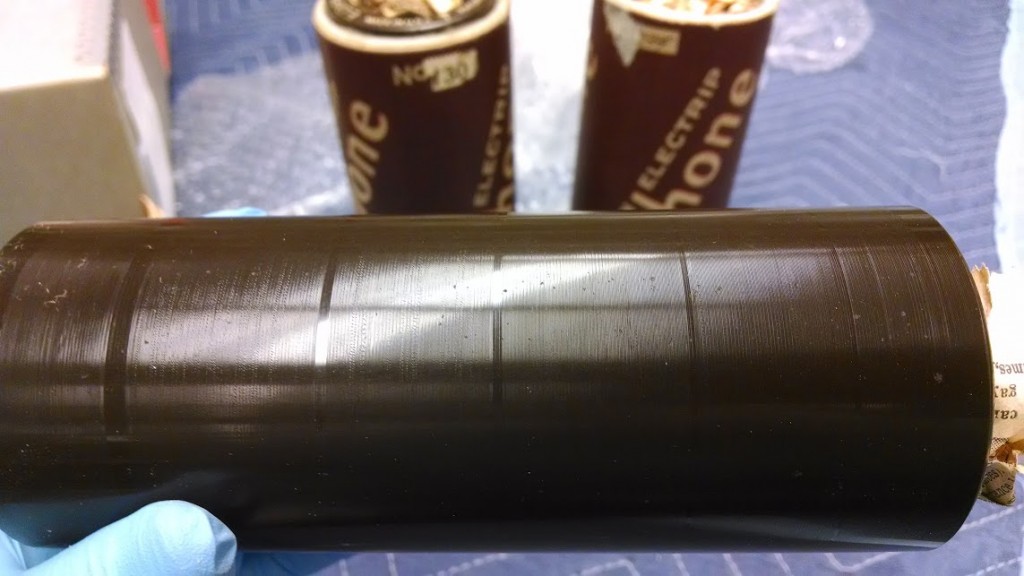 Initially, the cylinders were installed in the ancestors of jukeboxes in public places. Drop a coin into the slot, and the machine would magically dispense a song, monologue, or comedy routine. The technology was soon adapted for home use. Consumers could purchase prerecorded cylinders to play on their machines. Perhaps more amazingly, they could buy a home recording attachment and cut their own content onto the wax.

[PAUSE—shift from PLAY to RECORD mode] 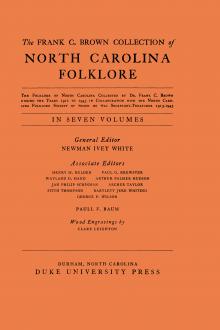 Frank Clyde Brown (1870-1943) served as a Professor of English at Trinity College, Duke University, from 1909 until his death. A native of Virginia, he received his Ph.D. at the University of Chicago in 1908. While at Duke University he served in many capacities, including being chairman of his department, University Marshal, and Comptroller of the University during its initial construction. These aspects of his life are chronicled in his papers held by the Duke University Archives.

This collection of materials, however, is concerned with activities to which he devoted equal time and energy, the organization of the North Carolina Folklore Society in 1913 and his personal effort to gather and record the nuances and culture of “folk” of North Carolina and its near neighbors, which occupied him from 1912 until his death. Under the impetus of a 1912 mailing from John A. Lomax, then President of the American Folklore Society, Brown as well as other faculty members and other citizens in North Carolina, became interested in folklore and organized the North Carolina Folklore Society in 1913, with Brown as secretary-treasurer. As secretary-treasurer of this organization from its inception until his death, he provided the organizational impetus behind the Society. Through his course in folklore at Duke, he also sent class after class out to gather the folklore of their locales, both during their studies and afterward. And virtually every summer he could be found in the most remote parts of the state, with notebook and recorder — first a dictaphone employing cylinders, and later a machine employing aluminum discs provided for his use by the University. The result, by 1943, was a collection of about 38,000 written notes on lore, 650 musical scores, 1400 songs vocally recorded, and numerous magazine articles, student theses, books, lists, and other items related to this study. The material originated in at least 84 North Carolina counties, with about 5 percent original in 20 other states and Canada, and came from the efforts of 650 other contributors besides Brown himself. 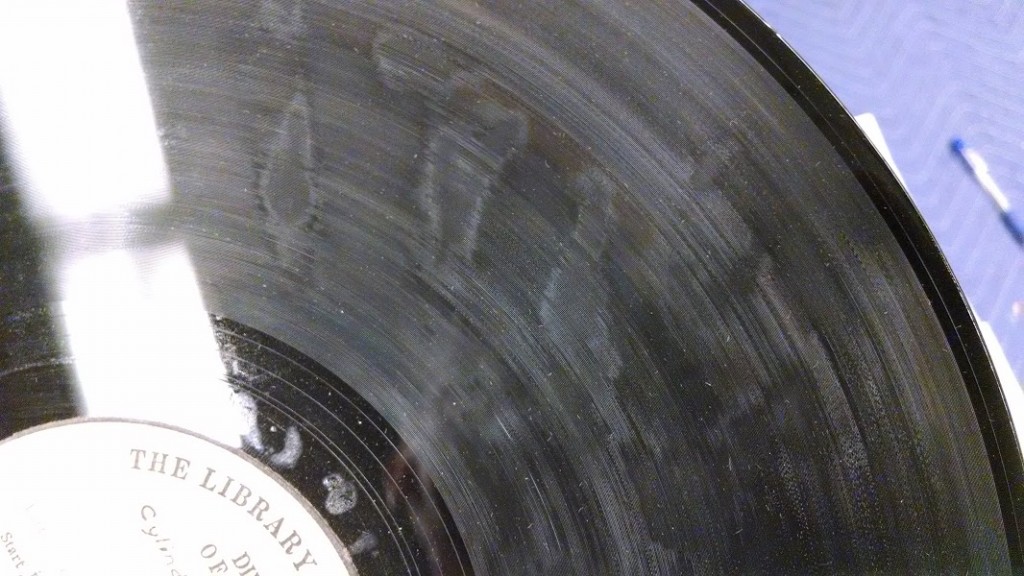 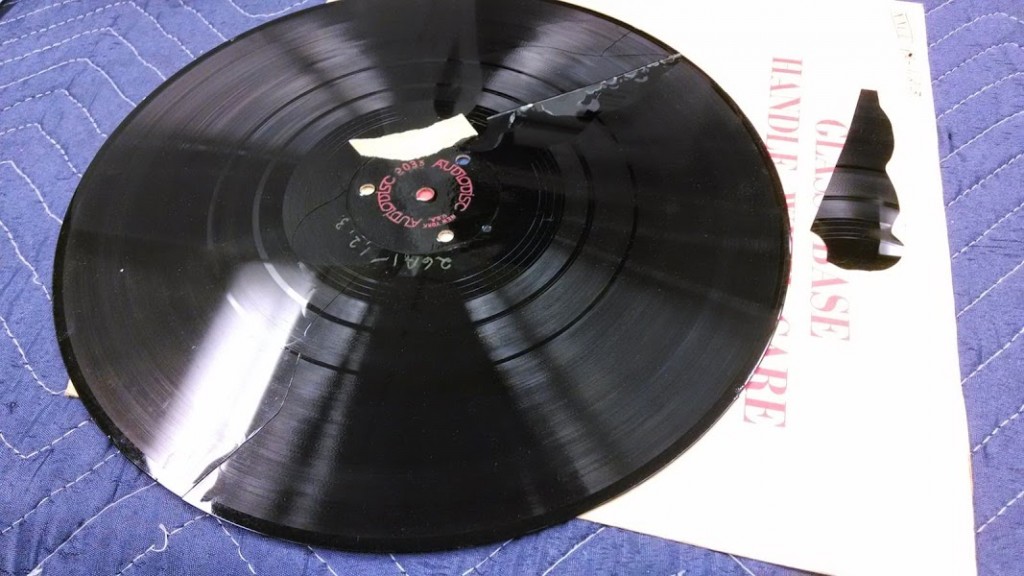 Thanks to our Audiovisual Archivist, Craig Breaden, for the excellent photos and unused title suggestion (“The Needle and the Damage Done”). Future posts will include updates on work with the Frank C. Brown Collection, other audio collections at Duke, and the history of sound recording and reproduction.