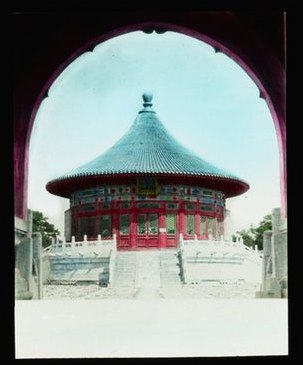 I started working on the metadata of Sidney D. Gamble photographs in January 2008 on a spreadsheet with no matching images. The nitrate negatives from the collection had just been digitized and resided in a different location. I was, however still amazed by the richness of the content as I tried very hard to figure out the locations of each picture, half of them were so challenging that I must have guessed wrong for most of them in my struggle to meet the project deadline. It was after the digital collection was published that I started to study more thoroughly these images of Chinese life more than 100 years ago. And they have since then continued to amaze me as I understand more of their content and context with the various projects I’ve done; and to puzzle me as I dig deeper into their historical backgrounds. I’ve imagined China in those times in readings, enhanced by films early and recent, yet Gamble’s photographs help me to get closer to what life really looked like and how similar or different things appeared. Recently the hand-colored lantern slides in the collection have made me feel even more so.

Lantern slides are often hand-colored glass slides, commonly used in the first half of the twentieth century to project photographs or illustrations onto walls for better visualization. We are yet to find out whether Gamble colored these slides himself or instructed the work by giving details of the description of the objects. I find the colors in these images strikingly true, suggesting that they were done by someone familiar with the scene or the culture. Whether it is a remote hillside village in a minority region in Sichuan as shown above or the famous Temple of Heaven in Beijing below, the color versions are vivid and lively as if they were taken by a recent visitor.

Gamble used these color slides in his talks introducing China to his countrymen. He included both images of Chinese scenery and those of Chinese people and their lives. The large amount of images of Chinese life in the collection is a record of his social survey work in China, the earliest of its kind ever done in China; as well as a reflection of his curiosity and sympathy in Chinese people and their culture. Funeral is one of Gamble’s favorite subjects, and I have no clue whether green was the color for people’s clothes working at funerals as I see several images with men dressed in green doing all sort of jobs, such as this man carrying the umbrella, the color is not offensive but needs to be studied.

The Lama Temple, or Yonghegong, is an imperial Tibetan Buddhist Temple. Every year in early March, masked lamas performed their annual “devil dance”, a ritual to ward off bad spirits and disasters on a Monday. I learned about this performance through Gamble’s photographs and the color images have simply added more life. A search online for images taken today brought back photos that look just similar.

There are nearly 600 colored slides in the collection, one can imagine the reaction of the audience when Gamble projected them on the wall in his talk about the mysterious China in the Far East. With the help of a capable intern, I was able to create an inventory last fall, matching most of them with existing black and white one in the collection. A project was proposed and approved quickly to digitize these lantern slides. The project was done quickly and a blog post by one of our digitization experts  provided some interesting details. In June this year, selected color images will appear in the travelling exhibit that professor Guo-Juin Hong and I curated and started in Beijing last summer when it opens at Shanghai Archives’ museum on bund. I believe they will fascinate the Chinese audience today as much as they had when Gamble showed them to the American audience.